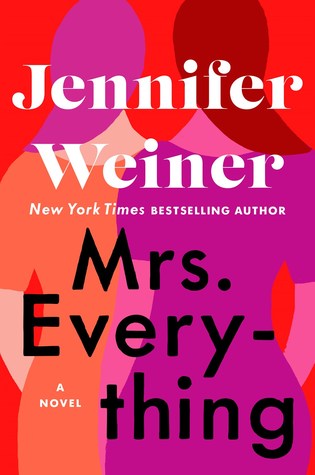 Probably the most ‘literary’ of Jennifer Weiner’s novels, Mrs Everything is a moving multi-generational family epic with a strong feminist perspective. The story follows the lives of two sisters — Jo the serious tomboy activist and Bethie the kindhearted and pretty free spirit — over the course of about five decades. The storytelling reminds me a bit of Kate Atkinson’s A God in Ruins or John Boyne’s The Heart’s Invisible Furies. Similar to both those novels, Mrs Everything manages to feel intimate and deeply personal while still broad in scope at the same time. We grow up with Jo and Bethie. We see the major events and cultural shifts in 20th and 21st century America through their eyes. And we feel right alongside them as women, struggling to balance everything life and the world expect from us.

I love the relationship between the sisters. Despite their differences, they’re fiercely loyal to each other, and even though they drift apart at various points in their lives, they still always have each other’s backs. I especially love how protective Jo is of her younger sister, and I really enjoyed the scene where Jo helps Bethie confront their abusive uncle.

The chapters alternative between both sisters’ perspectives, but the story seems to focus much more on Jo, and particularly how she grapples with her sexuality and societal attitudes towards lesbians at various points in her life. Jo is a wonderfully fleshed out and complex character. Seeing her story play out, with all of her fears and vulnerabilities and attempts at happiness, was very moving, and I loved how her story played out.

Despite the narrative focus on Jo, it was really Bethie’s story that hooked me, and Bethie whom I related to the most. I felt for her vulnerability and innocence, and her sometimes desperate attempts to gain control over mostly uncontrollable life circumstances. I absolutely hated Bethie’s uncle, for taking advantage of her family’s financial situation to sexually assault his niece, and I wish he’d had more of his just desserts than he received. Even though Bethie did grow up, move on and develop a fully robust life after the rape, I love how realistically Weiner depicted the lifelong consequences of such childhood trauma. Bethie developed eating disorders as a teen, and even when she started eating healthy amounts again, her self-image had been forever scarred, and her trauma remained an insidious presence in her mind. I found this to feel uncomfortably realistic, and I felt very strongly for Bethie throughout her life story.

The story does get a bit heavy after a while. Lots of bad things happen to Jo and Bethie, and while things never get quite as bad as in Hayna Yanagihara’s A Little Life, things do feel a bit bleak at times.

Overall, Mrs Everything is a good book, especially for readers who want to lose themselves in the complex ups and downs that occur throughout a lifetime. I personally prefer Weiner’s smaller scale stories (In Her Shoes remains my all-time fave), but I generally prefer more lighthearted books these days. This is a good story, and I enjoyed seeing Jo and Bethie as they grew up.

Thanks to Simon and Schuster Canada for an e-galley of this book in exchange for an honest review.