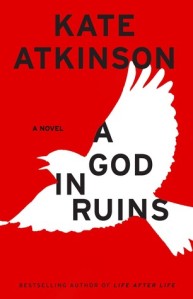 I had mixed feelings about Atkinson’s earlier novel Life After Life. I thought that concept behind the book — the ability to live one’s life over and over again until you get it right — was more compelling than the book itself. So when I received an advance reading copy of the companion novel A God in Ruins, I wasn’t quite that hyped up about it, and while I was going to give it a shot, I was at most cautiously optimistic.

A God in Ruins is about Teddy, the younger brother of Ursula, who in turn was the protagonist in Life After Life. Unlike Ursula, Teddy gets only one life to live, and we follow his journey from being a mischievous little boy to fighting in World War II as an RAF pilot, and finally to adjusting to life after the war.

I thought A God in Ruins was a much stronger book, though I also think that having it parallel Life After Life to some degree added to its strength. The poignancy of having only one life to live, set against the backdrop of World War II, is particularly heightened by our knowledge that having the chance to live one’s life over and over again isn’t quite tragedy-free either. The scenes about the war may be the most dramatic, but it’s Teddy’s life after the war that holds most resonance — his struggle to cope with going back to ordinary life and his strained relationship with his daughter.

There were some points where I felt bored reading the book, but other moments where scenes hold major emotional impact. I love the Adventures of Augustus stories about a little boy modelled after Teddy. The innocence and mischief in these tales are particularly resonant when contrasted with the hardness he needed to acquire for the war.

Despite the shifts back and forth in time, the story is fairly linear, with the exception of the final couple of chapters in the end. These chapters hearken to the mysticism of Life After Life, but in this case, I found they packed an emotional wallop for the reader. With these final few pages, Atkinson casts the rest of the novel in a new light, and heightens so much more the reality of war, of wasted potential, lives cut too short, and other lives that can feel too long.

Thank you to Random House Canada for an advance reading copy of this book in exchange for an honest review.

2 thoughts on “Review | A God in Ruins, Kate Atkinson”