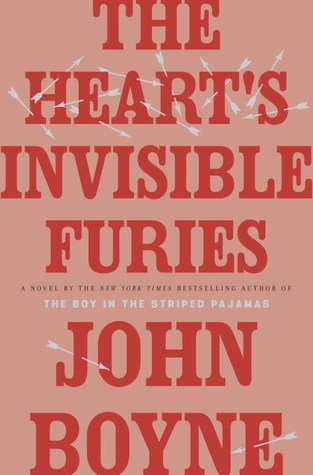 What an incredible, beautiful, captivating book this is! It’s the kind of book that begs to be read slowly, to have its words savoured as we dip in and out of Cyril Avery’s life and allow ourselves to be lost in John Boyne’s Ireland. This is one of my favourite books this year, and I cannot recommend it enough. In fact, I recommend you save it for a lazy weekend or your next staycation. It took me over a week to finish this (at 600 pages, probably no surprise), but it was a struggle each and every time to put it aside for real life. Going to work, running an errand and even going to sleep all interrupted my experience of this book, and I often wished I had saved it for a time when I wouldn’t have to take a break from reading quite so often.

The Heart’s Invisible Furies is a Dickensian epic, a coming of age story set in 20th century Ireland. Boyne dips into Cyril Avery’s life in seven year intervals, from his birth after World War II, through the AIDS crisis of the 1980s, and all the way into the legalization of marriage equality in this century. We meet the people in and around Cyril’s life — his birth mother who was chased out of town by her parish priest for having a child out of wedlock; his adoptive mother, a novelist whose greatest tragedy was that people loved her work; his adoptive father, a wealthy man who skirted tax laws and always reminded Cyril that he was “not an Avery”; his best friend and first love Julian, a handsome and charismatic young man; and Bastiaan, the warm and loving doctor whom he takes as a partner.

Boyne’s writing is beautiful and wry; he inserts biting commentaries about the violence of homophobia and hypocrisy of religious fundamentalism with such finesse that the humour feels gentle even as the observations are sharp. There’s a gentleness to the story overall, a subtle distance that keeps the reading comfortable even as Boyne tackles deeply troubling subjects. Much of that is due to the seven-year format. Just as a situation becomes too intense — a character is murdered, another character dies, a horribly hurtful decision is made — the section fades to black, and we revisit Cyril’s life seven years later when presumably the characters have moved on somewhat. We see the aftermath and the scars without having to deal for too long with fresh wounds. This is not to say that the story is easy; the novel is Dickensian not just in scope but also in tragedy. At times, the coincidences and the ill luck strain the edges of credulity, yet the story is so captivating and the characters so real that we’re more than happy to suspend disbelief.

Perhaps the crux of the story can be found near the end:

Maybe there were no villains in my mother’s story at all. Just men and women, trying to do their best by each other. And failing. [p. 557]

Such is life, and such is this book. The Heart’s Invisible Furies is a life writ large, intimate in scope yet expansive in the world it channels. It’s a beautiful, heart-breaking, hopeful novel, and one I wholeheartedly recommend.