I’m excited to be part of the Simon and Schuster Canada Timeless Tour, which celebrates historical fiction and kicks off today! Keep an eye on this blog over the next few weeks for a series of posts about some of the hottest historical fiction reads this spring.

To kick off this blog tour, Simon and Schuster asked bloggers a series of questions.

1. What do you love about historical fiction?

I love that historical fiction gives us an escape into the past. The world we dive into is real, and the events the characters go through were things that real people in the past have experienced, so there’s the emotional resonance of that realization. But there’s also the safety and comfort of already knowing how things turn out in the characters’ worlds. So for example, we can read about characters experiencing the horrors of a real war, and even though there’s the suspense of wondering what will happen to these particular characters, there’s also the comfort of knowing that the world as a whole will survive that war. Conversely, there’s also the potential for knowing that despite everything the characters have fought for, and knowing that real people have fought the same battle, whatever it was they fought for was never won, and that the battle continues to this day.

2. If you could go back to any fictional (Outlander / Come from Away / Bellewether etc.) historical time, when would it be and why?

Part of me wants to go back to the era of Outlander, but only on the proviso that I’ll be able to make my way back to my time whenever I choose. Diana Gabaldon creates such a vivid, breathtaking world with such compelling characters that it would be amazing to see it all in person. That being said, Gabaldon is also very realistic about the circumstances in which people in that time lived, and Claire is all too aware of the limitations of healthcare and civil rights during that time, so I don’t think I’d like to live there forever.

Another fictional historical time I’d love to visit is the world of Downton Abbey. The show does such a great job of depicting a world on the cusp of change, and it seems like such a lush and exciting time. Even though the upper class is on the verge of losing the world they’ve built up for generations, their lifestyle still seems so lavish and wonderful to experience. And even though the servants have difficult lives, they seem to have formed such a community belowstairs, and all this new opportunity is beginning to be opened for them.

3. If you could have dinner, brunch, or coffee with three historical fiction characters, who would they be?

Tea with the Dowager Countess from Downton Abbey because she’ll just be wickedly witty and can possibly tell so many incredible stories about her life.

Dinner with Jamie Fraser from Outlander. Diana Gabaldon has created such a compelling world, and such a striking character in Jamie that I feel like he’ll have a lot of great stories to share.

Do Agatha Christie’s mysteries count as historical fiction? I’d love to have tea with Miss Marple. I prefer the Hercule Poirot mysteries, but he’s a bit too fastidious for me to enjoy having coffee or tea with. Miss Marple is such a keen observer of human nature, and so understated about her brilliance that I’d love to spend an afternoon with her in a crowded tearoom, and just have her tell me all the secret lives she can discern from the people around us. I’d also be curious to see what she comes up with about me! 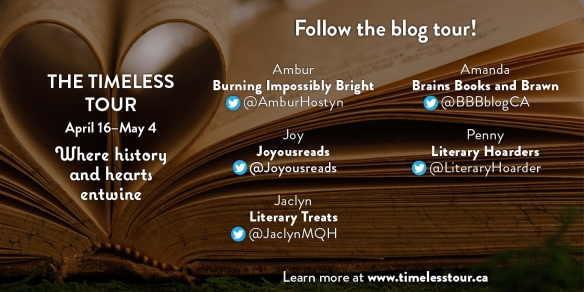 Coming up on this blog: 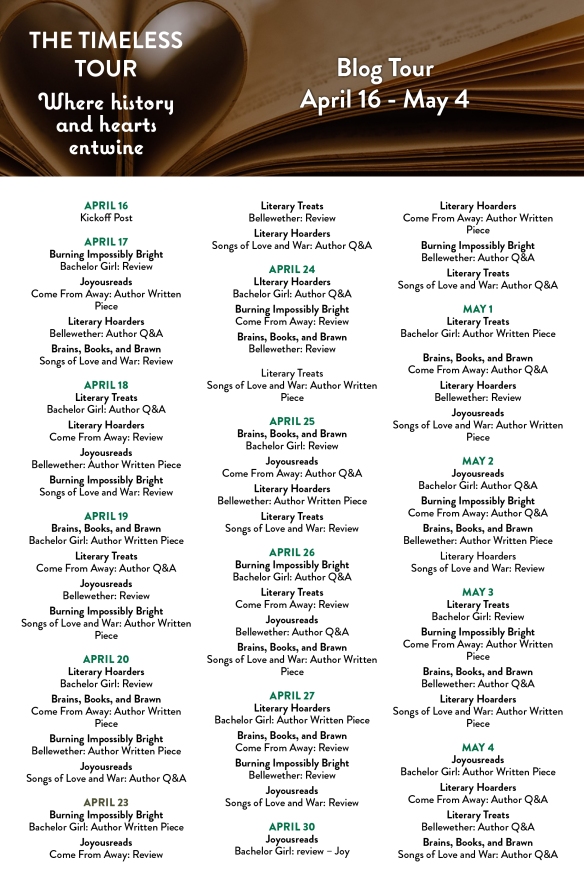 Thank you to Simon and Schuster Canada for the invitation to join this blog tour and for advance reading copies of the books above.

7 thoughts on “The Timeless Tour: Where History and Hearts Entwine”