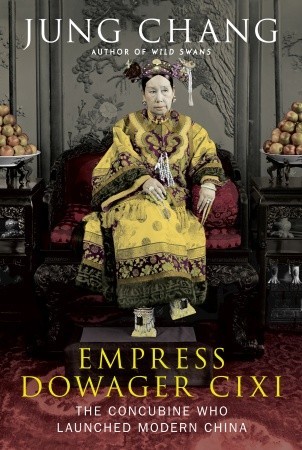 A visit to the Royal Ontario Museum’s Forbidden City exhibition (on view till September 1, 2014) reminded me of a book I had been meaning to read for months, but have somehow never gotten around to: Jung Chang’s biography Empress Dowager Cixi: The Concubine Who Launched Modern China. The ROM exhibit was fascinating, and gave me an idea of how complex the social structure was within the Chinese imperial court. There was even a digital interactive map of the Forbidden City, which had a spot marked with an intriguing tale of a concubine being thrown into a well by the Empress Dowager Cixi. I got the sense of a rather trapped existence, the emperor’s movements restricted within the city and potential spies everywhere. The ROM exhibit left me wanting more, and so I approached Jung Chang’s book eager to immerse myself even more deeply into the world I felt the museum exhibition barely grazed.

Chang’s book was an entertaining glimpse into some pivotal moments in Chinese history. The biography focused on Cixi as a political figure, and apart from one alleged relationship with a eunuch, didn’t give much insight to Cixi beyond her political role. It was also at times boring to read. The narration at times felt workmanlike, and some major historical events (the Boxer Rebellion) are barely glossed over. Why did the Boxers rebel in the first place, was it because of something Cixi did and what policies did Cixi employ to address these concerns? The book also felt one-sided — Cixi and the Western influence in China are good, people who want to keep the West out are bad — which made me feel that the story was not given the complexity it deserved. I later checked Goodreads reviews and learned that majority of historical accounts present Cixi unfavourably, and I wish Chang’s biography had given me a better understanding of why. As it was, she seemed like a total visionary whose results ended up on the right side of history, which then means it makes no sense for history to malign her.

That being said, there are some interesting points in the book, such as the steps Cixi took to obtain and keep power. I was most fascinated by Cixi’s relationship with the Empress — Cixi being the mother to the Emperor’s only son and the Empress being the official wife meant that both had to share the power when the Emperor died. Because there was such a resistance to women holding power, Cixi and the Empress chose to band together and present a united front rather than waste time battling it out. The result was an alliance that none of the male advisers could topple, and I loved that example of female solidarity winning against the patriarchy.

Overall, an interesting glimpse into Chinese political history, but not quite as exciting or as much of a page turner as I’d hoped.