Flavia de Luce is back, and Bradley has finally recovered some of the magic that made me fall in love with the series in the first place! I’ve never been a fan of Bradley’s decision to take Flavia to Toronto and involve her with the spy organization Nide, so I’m thrilled to see her back in England discovering a body in her hometown.

Flavia goes to a reclusive woodcutter’s house to deliver a message from the vicar’s wife, only to find him dead, tied spread eagled and upside down to his door. The clues: a lottery ticket and a collection of Crispian Crumpet children’s books. The witness: a tortoiseshell cat. Flavia’s investigation takes her around the village and into London as she digs into the decades-old death of an author and meets a colourful cast of characters, including a neighbourhood witch, a teenage aspiring singer, and the real-life Crispian Crumpet. The mystery is full of twists and turns, and while I figured out one of the big mid-book reveals pretty much off the bat, I certainly never saw the ultimate big reveal coming, nor the bad guy’s motivation.

Brinded Cat gives us a more mature Flavia, still geeking out about chemistry and blood patterns, but slightly more subdued in her reproach. Rather than playing mischievous scientific pranks on her sisters and angling for her father’s undivided attention, this Flavia worries about her father’s health (he’s in the hospital and she’s unable to visit) and wonders about the seemingly irreparable rift between her and her sisters. Flavia’s relationship with Dogger and Undine really come to the fore in this book, with Flavia struggling to come to terms with the changes in her family while she was away and also with the fact that she’s no longer the youngest child in the household. In one scene, she scolds Undine for some mischief, only to learn that Dogger had helped her do it. Flavia felt betrayed by Dogger, not because he did anything wrong, but rather because Undine appears to have taken on Flavia’s role in Dogger’s life. It’s a really well-written moment, as is the part where Flavia looks at Undine with affection tinged with annoyance, a sort of maturation into the older sister mode.

The end of the book is just heartbreaking. Seriously, Alan Bradley, what was that for? I personally wish it had been moved earlier in the story, or at least that we had a bit more time to process it, rather than ending the book so abruptly, cliffhanger style.

Still, overall, a wonderful, captivating book, and I’m so glad to see Flavia back to form.

Thanks to Penguin Random House Canada for an advance reading copy of this book in exchange for an honest review.

There are writers whose books you love, and then there are writes whose books have actually helped define your childhood. Judy Blume is such a writer. I remember reading Are You There God? It’s Me, Margaret when I was a child, and feeling that the author just got me. Somehow, Judy Blume placed her finger right on the pulse of pre-teen female anxieties, and while Margaret’s experiences may have differed from my own, in a way, I was Margaret. (“I must, I must, I must increase my bust.” Dear god, did we ever believe such an exercise would work?) 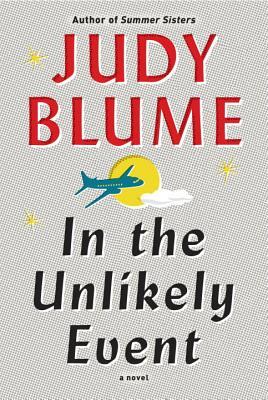 I also enjoyed Blume’s adult novel Summer Sisters, but it’s where her characters are young adults, just beginning to figure out who they are, that I think Blume’s writing really shines. I feel the same way about her most recent adult novel In the Unlikely Event, which was inspired by a true incident in her childhood, when a succession of planes crashed near her New Jersey hometown and caused a ruckus in the community. Commercial air travel was still relatively new then, and much like the 1990s movie The Net warned of the potential dangers of the Internet, the real-life incident in the 1950s must have caused much anxiety over the safety of airline travel and the possibility that the crashes may not have been accidental.

In the Unlikely Event focuses on the story of Miri Anderson, who was fifteen when the airplane crashes occurred, and who was flying back home thirty-five years later to commemorate the anniversary of the incident. We learn about various stages in Miri’s life, all the way until adulthood, as well as receive glimpses of the lives of the passengers in the planes that crashed. Blume also incorporates newspaper articles, written in the somewhat novelistic, emotionally fraught style of the day, which help provide a wider picture of what’s going on. (Fun fact: In Blume’s Toronto talk about this book, she said that because she was so busy and the deadline for the manuscript was coming up so quickly, her husband stepped in to write the newspaper articles for her.)

As with Summer Sisters, I felt it was really the scenes of Miri’s childhood that shone. Her wonder at silk stockings, her desire to be a journalist, and later, her increasingly outlandish conspiracy theories about the real reason behind the crashes all took me back to childhood. Whereas an adult would likely think of practical solutions to planes crashing, or otherwise engage in knowing rhetoric about the perceived, widely accepted, “true” cause for the accidents, children are freer with their imaginations, and freer as well to admit that no one is telling them anything and that the situation is all the scarier for it. While the plane crashes formed the impetus for the plot, I especially loved the idyllic scenes of Miri and her mother in the small town. I love the saving up of pennies for silk lingerie, which is impractical but oh so pretty. I love reading about the gossip amongst the townspeople, and the way everyone pretends to know everyone else’s business. I don’t necessarily know that I would want to live like that, but I certainly love reading about it, and Blume’s narrative voice just lends itself so perfectly to nostalgia.

The intermittent vignettes about the airplane passengers were interesting as well. On a whole, I thought they distracted from the main story. But on quite a few instances, I actually found myself more compelled to read on about the vignette rather than return o the main story. I’d get all caught up in some passenger’s life, feel disappointed that they died in the crash and that I’d never get to hear more about how their lives could have turned out. And then I’d realize just how utterly, horribly tragic accidents could be. How much of a life, of a potentially beautiful and exciting rest of one’s life, can be cut off in an instant, and how utterly, horribly unfair it is to not even know the reason this death occurred. With these vignettes, Blume brought home the tragedy of these accidents, and suddenly, Miri’s theories make much more sense, not so much because they become more logical, but because in a small way, we too have developed a need to make sense of what has happened.

In case you’ve never heard Judy Blume speak, she is simply marvellous. The Toronto Public Library hosted an event with her last summer. It was a sold-out event, with so much overflow that I believe the overflow room was just as crowded as the main one, and even though I had a ticket, I ended up perching on a bar stool somewhat behind a column at the very back of the room. It was so worth it though and made my inner thirteen year old squee.

Here is the Library’s video of the event:

What better way to kick off the New Year than by taking a break from our digital devices and opting to curl up with a good book instead? I unfortunately didn’t take part in Penguin Random House Canada’s #DigitalDetox challenge in January (tip: if you want to detox with books, don’t read on your iPad), but I thought this event would be a great way to relax, treat myself to some time away from the screen, and pick up some yummy, healthy recipes to boot!

The event featured samples from Cook. Nourish. Glow., including a delicious cocktail: cardamom, rose and pink grapefruit gin fizz. Some of the food, including the olive and rosemary chickpea flatbread and millet-sesame croquettes with tamari dipping sauce, were a bit dry for my taste, but I really enjoyed the salmon balls with crunchy white sauce. Amelia was there as well, and she spoke to us about her book and about cooking healthy, delicious meals.

The event also featured various tables with products and activities that promote health and relaxation, and the stop that immediately caught my eye was the Butter Me Body mini-spa station. Staff were on-hand to demonstrate some sugar scrubs and hand lotions, that were made from all-natural, Canadian-sourced ingredients. I selected the mango-scented products, which smelled delicious, and I loved how soft they made my skin feel without leaving any greasy residue.

I also really liked the drawer organizing station inspired by Marie Kondo’s book Spark Joy. A floorplaysocks sign quipped that “Happiness is a tidy sock drawer.” My drawers are currently overflowing with hastily crumpled items, so I still have to try out these techniques and let you know if they do indeed cause happiness.

As an aside, the swag bag we received included a copy of Life-Changing Magic, a journal inspired by Kondo’s book, and it’s my current favourite thing. The journal provides space to record whatever has sparked joy in your life in a particular day, and it has three sections per day, so one journal can last you up to three years. I love the act of taking note of the little joys each day, and I love knowing that, on days when things aren’t quite going my way, I can just look back on these entries and remind myself of all I can be grateful for in my life.

The colouring station is another highlight from the event. I now want a copy of that Cats in Paris one, as well as this Paris Street Style colouring book I unfortunately didn’t get in the shot. Other highlights for book lovers and TV buffs include colouring books for Game of Thrones and Outlander. 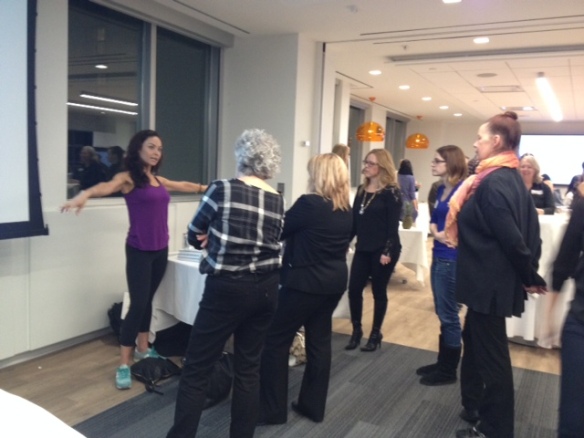 I also happened upon a group learning gentle stretching techniques based on the “Essentrics” workouts Miranda Esmonde-White developed and wrote about in her book Aging Backwards.

Finally, there was a whiteboard where we could post questions for an upcoming Twitter chat with Cheryl Strayed, the author of Wild and Tiny Beautiful Things. If you’re a fan, join in on February 5 at 7 pm EST!

It was great checking out the stations and meeting up with fellow book bloggers. The swag bag handed out at the end of the event was full of treats, including a sample of the Butter Me Body scrub, the journal I mentioned earlier, a signed copy of Cook. Nourish. Glow. and, another personal favourite, a coupon for a free cup of tea at David’s Tea. I also really love the quote on the Cheryl Strayed Post-It pad: “Be brave enough to break your own heart.” And I can’t wait to try out some of Amelia Freer’s other recipes.