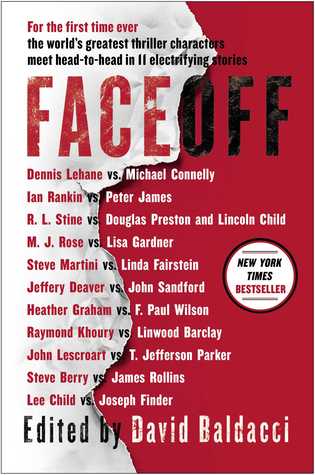 Ever wondered what would happen if Lee Child’s Jack Reacher teamed up with Joseph Finder’s Nick Heller? Or if Ian Rankin’s John Rebus and Peter James’ Roy Grace worked together to solve a cold case? FaceOff, edited by David Baldacci and featuring 23 of the world’s best thriller writers, sounds like a thriller fan’s ultimate fantasy, and with such a super star line up of authors, it should come as no surprise that the collection is one of the best page turners I’ve read this year.

The best part for me was the introduction before each story, where Baldacci explains why these authors were paired up, what they decided would be the most natural way for their characters to end up together, and how they collaborated on the story. In the first face-off, for example, we learn that Michael Connelly wrote the first six pages of the story and a few ideas on how the story could go, and expected Dennis Lehane to take a couple of days to finish the story. Instead, Lehane took several weeks and added twenty more pages, “evolving the plot from the shorthand to the complex and humorous.” I love this peek into the working styles of these great writers. The book is purportedly a series of face-offs between popular thriller characters, but these introductions reveal how much it is also a series of collaborations between the authors.

I especially love that the collaboration between these writers I admire goes beyond the collaboration we see in this volume. For example, Steve Berry and James Rollins have inserted sly references to the other’s characters in their own books in the past, and with this anthology, finally got the opportunity to bring Cotton Malone and Gray Pierce together for a full story.

The stories in this anthology are all solid thriller shorts. It’s exciting to see characters you like working together, but that’s a gimmick that could grow old pretty quick. The authors in this anthology had a delicate balancing act — how to feature both major characters equally and still have it be about the story rather than simply a fan fiction mashup of audience favourite cameos? Sure, at times, there was a bit of expository dialogue that served more to highlight the characters as stars rather than the story, but that’s forgivable, given the purpose of this anthology. What’s important is that even with these little asides to wink at the fans, each of the stories here is solidly constructed, and with a compelling plot.

While all the stories were fun reads, there were a few standouts. Gaslighted, by R.L. Stine, Douglas Preston and Lincoln Child pitted Slappy the Ventriloquist Dummy vs Aloysius Pendergast and was creepy as hell. Unlike the other match ups, this one featured a clear battle between the main characters. I’m unfamiliar with both characters — I’d read only R.L. Stine’s Fear Street series and don’t remember Slappy at all, and I’d read only one Preston/Child book years ago, which I found so scary (can’t remember why, to be honest) that I never dared read them again. Unsurprisingly then, this story really gave me the chills, and in a collection primarily of detective stories and real world crimes, it stood out.

Another standout is M.J. Rose and Lisa Gardner’s The Laughing Buddha, which pits the pragmatic police work of D.D. Warren vs the more esoteric Malachai Samuels, using the theft of a Buddha statue to spin a tale of past lives and a crime from centuries ago. It was suspenseful, and while both characters were apparently after solving the same crime, the contrast between Warren’s job and Samuels’ mission made it a race to the solution.

Finally, one of my favourites in the collection is Good and Valuable Consideration by Lee Child and Joseph Finder. I love the unexpected nature of the encounter, and the almost offhand way that the collaboration between Jack Reacher and Nick Heller began. Both characters were watching the same baseball game at a bar and end up sitting near a man in need of their help. Much of the conversation happens in glances between the characters — two men who don’t know each other but instinctively sense the other’s power and somehow reach a silent understanding. The writing as well seemed especially smooth, as if the authors shared the same level of mutual understanding that their characters achieved in a night at a bar. As Baldacci writes in his introduction to this face-off, “Actually, their biggest problem was who would win the Yankees-Sox game that kicks the whole thing off.”

Overall, FaceOff was a lot of fun to read. I’m a fan of thrillers in general, and so I was particularly excited to see that one of my favourite authors ever, Ian Rankin, was paired with another personal favourite, Peter James. I did wish that other personal favourites Stuart MacBride and Val McDermid had been included — can you imagine Logan McRae and Tony Hill working together to catch a super-psychopath? Epic! Volume 2, perhaps, Mr. Baldacci?

Heads up on Thrillerfest IX, at the Grand Hyatt, NYC July 8 – 12, 2014. Many of the authors in this anthology will be there, and the conference was organized by International Thriller Writers, the group that brought these authors together for this anthology in the first place.

Thank you to Simon and Schuster for a copy of this book in exchange for an honest review.