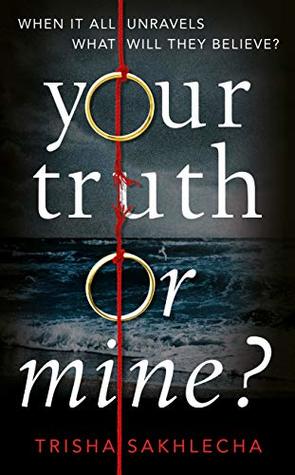 Your Truth or Mine? begins with a knock at the door of Mia and Roy Kapoor. A young woman has gone missing, and the police want to bring Roy in for questioning.

As the story unfolds, it soon becomes clear that Mia and Roy are far from the happily married couple they appear to be. For avid thriller readers, it will likely come as no surprise that Roy is hiding secrets from Mia, which go beyond a single infidelity.

What did come as a surprise to me is not so much that Mia also has secrets of her own, but that the problems in Mia and Roy’s marriage go beyond infidelity and the standard-issue loneliness / restlessness that often leads to it. Rather, Sakhlecha explores a darker angle to their relationship, and delves deep into how Mia’s experiences in childhood have contributed to how she deals with her current situation.

At the end, the bad guy is someone I didn’t suspect until fairly late in the story. The reveal of their identity is powerful not so much in the shock of it being someone unexpected. Rather, its power is in the realization that this person’s actions further compound on the themes of vulnerability, trust, and the abuse thereof, which were among the drivers of the narrative.

I enjoyed this book. It’s a solid, twisty, psychological thriller that kept me turning the pages even in the midst of a soporific heat wave. More than the thriller aspect, however, I like how it explored the overall twistiness of relationships, and how trauma from particular relationships in one’s past can contribute to a destructive cycle in one’s relationships moving forward.