In this sequel to Finding Jade, demons have crossed the rift into the real world and twin Seers Jade and Jasmine must deal not just with demonic forces but also with Toronto mayor Sandra Smith, who appears hell-bent on sowing fear to justify her protectionist policies. Solomon’s Ring ramps up the action and fleshes out the real-world elements only hinted at in Finding Jade. Despite its supernatural elements, the novel feels very much rooted in the real world.

Toronto is one of the final remaining cities surviving the ravages of climate change. The city has historically been welcoming to refugees from around the world, but a series of violent incidents have given rise to a fear that some of the refugees may actually be climate change terrorists, using Toronto as a platform to advance an environmentalist agenda. In response, Mayor Smith argues for the need to close Toronto’s borders and increase domestic security, and institutes policies to increase surveillance of refugees. This should all sound uncomfortably familiar to readers; Solomon’s Ring holds up a rather unflattering mirror to things being said and done today.

Solomon’s Ring expands slightly on the mythology around the Seers’ powers and shows us Seers more confident and comfortable using these powers. The book also begins to show the links between the demon plot and the real world one, as demons play a role in the real world political drama. A magical object has the potential to at least alleviate the real world conflict, and the Seers must go on a quest to return this object to its rightful place. I love that Payne keeps the climate change piece realistic — regardless of how the villain’s plot turns out, some issues like climate change and people needing to leave their homes behind will not be magically resolved.

I also enjoyed seeing the dynamic between Jade and Jasmine develop, and particularly Jade’s insecurities about her place in the real world after so many years. Jasmine is selected by the mayor to head her youth task force, and while neither twin really wants to be a tool for the mayor’s propaganda, I can understand why not being picked alongside her sister would shake Jade’s confidence. I can also understand why Jade chafes against her mother’s overprotectiveness, and how afraid she is to confront what she went through in The-Place-in-Between.

Beyond Jade, however, and to a lesser extent Jasmine, the other Seers aren’t well-developed at all. Rather, they’re defined mostly by their birth order (older twins are headstrong and younger twins are more thoughtful) but otherwise feel interchangeable, which makes it difficult to care when they’re in danger. Worse, the Seers, and in particular Jasmine and the other older twins, make many stupid decisions that put themselves in unnecessary danger, only so something big can happen to advance the plot. For example, despite the dangers of a new type of demon and terrorist attacks, the Seers decide to go out late at night to do extra training or walk around the city to fight bad guys but with no actual strategy in mind or urgency to do so. Still, the energy and excitement as they fight is palpable, and the book is a fairly quick, fun read.

Solomon’s Ring ends on an exciting note and promises readers an exciting Final Battle in the next book.

Check out the other stops on the Solomon’s Ring blog tour this week! 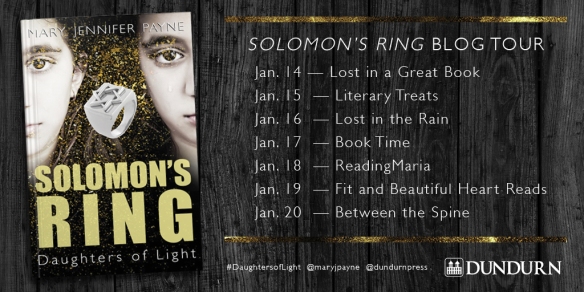 Thank you to Dundurn Press for an e-gallery of this book in exchange for an honest review.