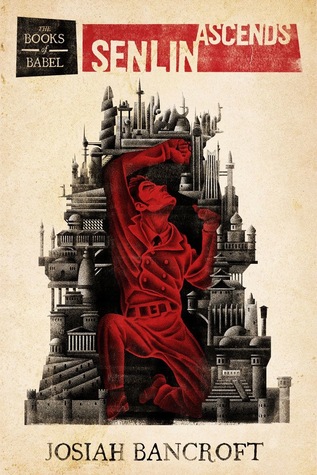 The cover of my advance reading copy of Senlin Ascends includes a Goodreads review from a reader named Paul: “You need to read this! Don’t read the blurb, dive in blind.” I took his advice and dove in blind, but managed to read as far as I did only because I ended up reading a few of the glowing reviews mid-way through. Senlin Ascends isn’t a book for everyone — but based on the reviews, for the right kind of reader, it is an unexpected, brilliant delight.

In Senlin Ascends, mild-mannered schoolteacher Thomas Senlin takes his young wife Marya on the trip of a lifetime for their honeymoon: the much-acclaimed Tower of Babel. Senlin has a tattered, dog-eared copy of the guidebook in his pocket and has spoken often to his students of the many wonders of its various “ring-doms.” Wealthy tourists can take an airship to an upper level and enjoy the view; more frugal travellers like Senlin and Marya must start at the bottom and make their way up. Their destination is the third ring, which is purported to have hotels and resorts and basically everything needed for a vacationer’s paradise. Unfortunately, Senlin loses sight of Marya at the ground level, and as he discovers from other travellers, groups that are separated in the Tower rarely find each other again.

What follows is a classic quest narrative, as Senlin must work his way up the rings to find his wife.His search is further complicated by the fact that he doesn’t have enough money to get back home, and that he and Marya planned to find a hotel when they arrived and so hadn’t made any reservations or plans about meeting spots. Senlin is a bit of a stuffy Don Quixote figure, his naivete slowly chipped away by the people and experiences he encounters. When he finally does come across a solid lead on Marya’s whereabouts, he gets involved in a crime caper that doesn’t turn out well.

The story has a bit of the feel of Dante’s Inferno, as each ring up gets progressively worse. The attractions of each new ring are methodically peeled back to reveal an unsavoury, dangerous underbelly. In the theatre-like setting of the second ring, for example, a melodramatic production where all visitors must play a pre-assigned role ends badly when one of the ‘actors’ takes his role too seriously, and the Tower’s administration punishes rather than protects the innocent bystanders. In the much-coveted third ring, the excesses of holiday carousing can lead one into trouble with the law, but the set-up feels more like entrapment than anything else.

There are clear allegorical elements to the story, and a lot of smart social commentary about class and bureaucracy and justice and the utter absurdity of reality. The pace is deliberately slow, likely to set up the new world in each ring and build up how the illusion of this ring will eventually break down. But it’s all a bit too heavy-handed for me, and the action was much too slow.

Senlin Ascends wasn’t quite the right fit for me, but more patient readers may get quite a bit out of how Bancroft teases out the various threads of the world he’s created. I highly recommend you check out other reviews, or perhaps check out this excerpt on the publisher’s site to see if this book is for you.

Finally, a minor quibble, but wasn’t the Biblical Tower of Babel about a bunch of people who ended up speaking different languages and not understanding each other? It may have gone over my head, but I didn’t get anything about linguistic differences in this book, and therefore, the Tower could’ve been any other Tower at all.