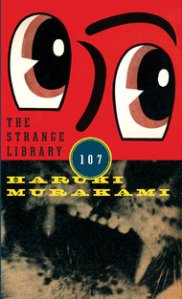 In The Strange Library, these wonders are dark indeed. A boy visits the library for an assignment and encounters a “little old man” who imprisons him in the basement and forces him to read. “Because brains  packed with knowledge are yummy, that’s why,” explains the old man’s reluctant assistant, a sheep man. “They’re nice and creamy. And sort of grainy at the same time.”

The story then follows the boy’s attempt to escape, aided by the sheepman and a mysterious, voiceless girl. The question of whether or not he succeeds feels almost inconsequential. The entire narrative feels like a fevered dream — the best of Murakami distilled into a child’s fairy tale.

The Strange Library is, in a word, beautiful. I’ve long been a fan of Chip Kidd (I even bought Murakami’s 1Q84 in hardcover for Kidd’s delicate tissue layered cover), and Kidd’s work in this volume is beyond words. The mere experience of opening the book feels like opening a present. And the illustrations throughout enhance the dreamscape Murakami has created, without giving anything away.

Murakami’s language as well deserves praise, as does Ted Goossen’s translation. The cadence is hypnotic, almost seductive, lulling the reader into a space where sheep men exist and the state of the moon determines one’s fate. It’s a quick read, but I hesitate to call it an easy one. I don’t think I quite understood what I read, and I mean that in the best possible way. There’s so much more to this story than the actual narrative, and Kidd’s mysterious illustrations as well hint at a universe beyond the page.

The young boy in the story sets out to research taxes in the Ottoman Empire, and ends up the star of a supernatural adventure. So too will the reader of this text set out to read a short, illustrated fable, and realize that so much of the story still lies in the white space. I will definitely have to re-read this one.