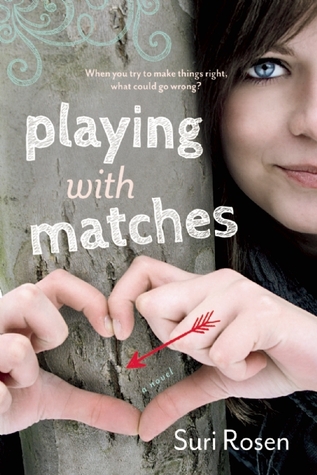 When her sister’s heart is broken, 16 year old Raina Resnick decides to set up the anonymous matchmaking service “Match Maven” and help her sister find true love. Leah, after all, is twenty-three and unmarried, and as Raina points out, this is a big deal because “you have to think in dog years when you’re single in a traditional Jewish community” (page 31).

Playing with Matches is a hilarious tale of matchmaking, filled with increasingly ludicrous scenarios and yet anchored throughout by Raina’s very real desire to reconnect with her sister. The Match Maven dates are hilarious — a scene involving a Porta Potty is just so over the top that all you can do is laugh. For anyone who’s tried online dating and had some pretty horrific experiences, this book will make you feel better about your love life. And yet there is also the story of Esther, an elderly woman who lost her husband to a brain aneurysm years ago and is now looking for a second chance at love. Just as Raina does, we can’t help but feel invested in these singles asking for help, and just like Raina, we want them to find their perfect match.

However, it is Leah’s search for a match that really propels the story. As the anonymous “Match Maven,” Raina is able to offer advice and connect with Leah at the same time as Leah is pulling away from her sister in real life. Honestly, Leah’s conversations with Match Maven made me really uncomfortable — it’s Leah’s decision whom to trust with her feelings, and she was really being tricked into revealing them to her sister. I understood why Raina felt she had to do it, and how because of her persona as Match Maven, Raina couldn’t really do much to stop it. Still, it felt like an invasion of her privacy, and despite the way things eventually turn out, it still felt like a betrayal of trust. More a criticism of a character’s actions than a criticism of the book itself, but I do wish this aspect of it had been explored a bit more.

The novel also stretches credibility, though that might just be my unfamiliarity with Jewish matchmaking customs in the 21st century. If a matchmaker is supposed to broker the deal from the first date all the way to the wedding, and if, like a wedding planner, she must be on hand to help deal with disasters as Raina is, is it believable that the matchmaker remain anonymous? Also, do matchmakers render the service for free, or are they usually paid? None of Raina’s clients ever enquire about fees, or, if she is anonymous, about methods of payment. Given the level of commitment required and the significance of the task, I’d think matchmaking would be a profession, and therefore a paid service, rather than something one does for strangers just out of the goodness of their hearts. I of course know nothing about traditional Jewish matchmaking rituals — for example, I didn’t realize it was still so prevalent in the 21st century — and this book makes me want to learn more.

Still, Rosen speaks of Jewish customs with an ease and confidence that Eve Harris lacks in The Marrying of Chauni Kaufman, an “Orthodox Jewish Pride and Prejudice” that struck me as presenting an expertise on a culture without adequate understanding. I don’t know how accurate Rosen’s portrayal of Jewish customs is, but her book is at least much more natural in tone and affectionate about these customs. Playing with Matches is also less concerned with detailing all the various aspects of the traditions — rather, it concerns itself much more with the story, providing enough details that I knew what was going on but not bombarding me with so much information that it felt like more like a Wikipedia article than a novel.

Playing with Matches is a great book for the weekend. The book blurb describes Raina’s matchmaking service as a cross between Jane Austen’s Emma, Dear Abby and Yenta the matchmaker, and that’s pretty much on point. Some of the plot threads were too neatly resolved and at times, Raina’s streak of bad luck felt like a ploy by the author to garner sympathy for the character. But overall, the story was a lot of fun to read, and featured a cast of characters you want to succeed in their search for true love.

Thank you to ECW Press for an advance reading copy of this book in exchange for an honest review.