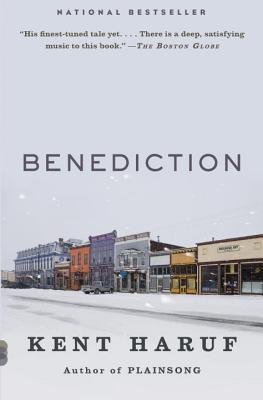 Benediction is a deliberately paced, contemplative read about a man dying of cancer, and the people around him. The restraint of Haruf’s prose keeps the story from becoming maudlin, and while Dad Lewis’ strength is admirable, the novel resists the easy turn towards the inspirational. Instead, what we have is a story that rings with quiet truth.

There’s a large cast of characters, some of whom are a bit difficult to keep straight, but there are many memorable figures among them. A young girl who has lost her mother to cancer, and who finds a sense of family with a pair of neighbours. A woman who lives with her mother and who is still dealing with the remnants of a love affair gone wrong. A preacher who has just moved into town, and whose interpretation of a particular Biblical passage sparks controversy in the close-knit community and division within his own family. Dad’s own estrangement from his son, and the pain of longing to see him again before death. Dad’s battle against cancer is the linchpin upon which all these stories revolve, and Haruf creates a textured portrait of a small town.

Haruf’s narration echoes the diction of his characters, and while his use of “of” rather than “have” (“We would of had it for her”) drove me crazy throughout, the language as a whole does create a measured pace that lulls the reader in. There are also some passages that are absolutely beautiful. A character walking down a street and looking into his neighbours’ houses tells a police officer he was hoping “to recapture something… The precious ordinary.” [p. 162] I love that phrase, “precious ordinary.”

The character then goes on to confess:

I thought I’d see people being hurtful. Cruel. …But I haven’t seen that. Maybe all that’s behind the curtains. …What I’ve seen is the sweet kindness of one person to another. Just time passing by on a summer’s night. This ordinary life. [p. 163]

This is a novel about death, about violence and about loneliness, but the quotes above best capture the spirit of the text. I generally dislike calling a novel uplifting, because it makes the book sound utterly precious. But in this case, uplifting works. And it’s a good book, a quiet meditation on life through the lives of ordinary people in a small town.