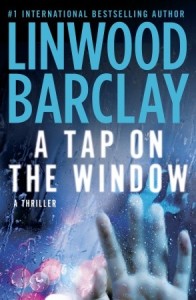 Linwood Barclay has been called “a suspense master” by no less than Stephen King himself, and much of that may be credited to the sense of intimacy he cultivates despite rather outlandish hooks. A girl wakes up to find her entire family gone, a man witnesses a murder on a Google Earth-type program, yet even with some action movie-worthy scenes, we are still caught up in the urgency of their situations. More than that, we can actually believe that these are happening to people we know. Barclay’s gift is in highlighting the ordinary in the face of rather extraordinary circumstances; his background in journalism serves him well, and there’s an almost voyeuristic feel to reading about such personal traumas in his characters’ lives.

Barclay’s latest book, A Tap on the Window, may be his most intimate book yet. From the very beginning of the story, we are introduced to a protagonist haunted by personal tragedy – private investigator Cal Weaver is still mourning the death of his teenage son Scott, a tragic accident allegedly caused by drugs. Scott’s death has put a strain on Cal’s marriage – his wife continues to sketch Scott over and over, never quite satisfied that she has gotten it right, and Cal is having too difficult a time himself coping with the death to help her. As the story progresses, we learn that Cal’s grief and desperation to find answers have pushed him into a much darker place than we’d originally realized, and that he too is guilty of having committed some morally questionable acts.

The main mystery however, while teasing the readers every now and then with potential connections to Scott’s death, remains separate. It’s probably the most mundane of Barclay’s hooks, the one most likely to happen to the man on the street, and quite frankly, one that probably worked only because the story was set in a small town. While driving one night, Cal agrees to give a hitchhiking teenage girl a lift. He hesitates, thinking of the potential dangers of picking up a teenage girl, but gives in when the girl says she knew Scott. To be honest, as a woman, I’d always known the dangers of accepting rides from strangers, particularly men, but until this book, I’d never thought of the potential dangers on the flip side – that some men may be wary of giving rides to strange women. Unfortunately for Cal, his initial instincts are right — the girl ends up missing, her friend, whom Cal was tricked into giving a ride as well, ends up dead, and Cal becomes the main suspect. If it seems a stretch that a random hitchhiker knew Cal’s son, and that Cal was almost immediately identified as the man who picked her up, Barclay makes it work by setting the story in a small town. We see how intertwined the lives in the community are, and how much each person knows about their neighbours.

Despite Cal being the prime suspect, this mystery didn’t really feel urgent to me except for its links to Scott’s death. What I did find interesting was Barclay’s depiction of corruption in the small town police force. Police officers would use excessive force, and the town would turn a blind eye and, worse, be bullied into supporting the police in public. I could imagine how trapped Cal felt, knowing how much power the police force wielded. More significantly, I could imagine how trapped Scott must have felt – even when we don’t know the circumstances behind his death, we get a picture of a teenage boy with a strict sense of right and wrong, and we can only imagine how he must have felt in such a town.

I’ve always found the endings the weakest part of Barclay’s books, but I actually like the ending in this one. There’s definitely still the unexpected twists, but Barclay set them up better than in his other books, and so they didn’t feel as contrived. There is a rather senseless act of violence near the end that really got to me as well. As I mentioned, Barclay’s gift is in detailing the relationships between the characters, such that you feel you know them, and you care for them. So that particular twist touched me, on an emotional level.

Overall, a really good Barclay book. Not the faster page turner I’ve read by him, nor necessarily the most emotional one. But it’s probably the one that’s felt the most real, primarily because of the attention to detail Barclay gave not just his characters but their society. I love the glimpse into small town politics, and I love how it expanded the story beyond a mystery centred around individuals.

Thank you to Random House of Canada for an advance reading copy of this book in exchange for an honest review.

1 thought on “Review | A Tap on the Window, Linwood Barclay”