Father Tom Christmas sprains his ankle during a charity event and is forced to convalesce in an estate in town, where a large number of relatives are in the area for that same charity event. One of the family members is murdered, and Father Christmas is pulled into the investigation. Benison has set up a classic Agatha Christie style cozy mystery with Ten Lords A-Leaping, with the requisite large number of possible suspects, family secrets and scandals, and detached observer ticking away at the clues.

It’s exactly the type of mystery I usually love, yet I couldn’t get into this one. There is a long list of characters and possible suspects, which shouldn’t be a problem except none of them really stood out. I found it difficult to keep track of who people were and I often found myself flipping back several pages to try to remind myself who that person was. I hadn’t read the second book, and it’s been years since I’d read the first, so that may be why it took me a while to get to know even the series characters, and it definitely didn’t help that the new characters were so interchangeable.

The story felt pretty plodding, and while a slow pace is par for the course for this type of mystery, this one just felt bogged down. Interspersed throughout the mystery are letters by Father Christmas’ housekeeper Madrun to her mother, about the goings on in the estate, and perhaps this is a series signature, but it just felt unnecessary. The subplot with Father Christmas’ daughter and one of the teens in the estate trying to solve the mystery themselves was entertaining, and I liked the hint of romance between them.

The plot seems simple enough — there’s a fortune at stake and the victim was pretty universally disliked. Still, the plodding pace and confusion of characters harmed the clarity of the basic plot, and by the time of the big reveal, I hadn’t connected enough with the characters or the mystery to care whodunnit.

The Father Christmas books are fairly popular, and Benison’s writing is good enough that I’d certainly give this series another shot. As a series detective, Father Christmas strikes me as being unmemorable other than his unusual name, and there is only so far you can go with a pun. Still, there are nine books to go, and plenty of time for the series to find its legs. In the meantime, Miranda is the sleeper in this series, and it will be interesting to see how her character develops. 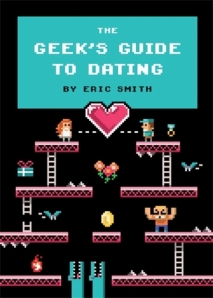 Calling all geeks! Ever wonder how to catch the eye of that gorgeous fellow geek? In this hilarious guide to dating, Eric Smith takes the geeky reader through the various stages of getting the date then beginning a relationship (or, reality check: possibly moving on) after that date.

The chapter titles are given geeky titles, mapping the dating landscape like an old school 1980s video game with some fun Star Trek and Star Wars references thrown in. “Engage, Player One” sets the ball rolling, and “Do or Do Not: There is No Try” gives tips on how to screw up the courage to ask someone out.

The book offers some pretty common sense tips on dating: start a conversation rather than a debate, clean out the junk in your car before picking your date up, put some effort into your outfit, and so on. There’s even a primer on how to kiss someone, though Smith cautions: “This isn’t the Konami code here, and trying to make out according to these directions (Up Up Down Down Left Right Left Right) would only make things weird.”

Still, what sets this book apart, and makes it so much fun, is that all the tips are couched in geeky language — video game terms and science fiction references. A section on choosing the right wingman, for example, accords a number of points per option: a “Sharp Eye for Style” gets him “+250 to Armor”. A list of scenarios with tips on how to deal with them includes meeting someone at a video game store, or improving your online dating profile. I admit some of the references completely went over my head (what’s a “Kolinahr”?), but Googling them just added to the fun.

Minor complaint is that the book is completely geared to male geek readers. Smith does address this in the beginning of the book, and explains that while the text is ostensibly directed at males, a lot of the tips are equally applicable to female geeks. Fair enough, but as a female geek, I would have loved to see at least a gender neutral geek guide to dating, and if the tips are applicable to both genders anyway, why not write them as such? Or perhaps add some chapters dedicated to challenges particular to geeks from each gender. Or, on that note, someone please write a female geek’s guide to dating. Given how many books and publications on geekdom are already geared towards male geeks, it would be nice to have one written with a female geek audience in mind. Any female geek humourists up to the challenge?

Cary Fagan’s My Life Among the Apes was longlisted for the 2012 Scotiabank Giller Prize and it’s easy to see why. Fagan’s stories are striking, the subtlety of his language enhancing the emotion within the human relationships he explores. Two of my favourite stories in the collection feature the public space of a diner, and the connection between people who interact seemingly on the most casual of levels. In “I Find I Am Not Alone on The Island,” a waitress forms a lifelong bond with a favourite customer whose name she doesn’t even discover until he dies. In “The Little Underworld of Edison Wiese,” a waiter who takes pride in his job despite the crappy working conditions spends an unusual New Year’s Eve at work. The unexpectedness of lasting connection is what makes these stories so lovely. The moment when the waitress, years after having left the diner, feels the need to share a literary allusion the customer had mentioned to her in passing, hints at a far deeper significance. And the scene where the waiter realizes the importance of his job is heartwarming.

My favourite story, “Wolf,” is about a Jewish man who returns to Germany to visit his granddaughter. Seeing a Holocaust memorial, all he can think of to say to his granddaughter is that he doesn’t feel qualified to judge it. How can he, how can anyone really, express such an experience? The tension between history and the present simmers throughout the story, inflecting his visit with much that is left unsaid. It’s a powerful story, and the ending makes you wish to read more, even as you feel the story had ended on a perfect note.

Oddly, it was the title story I found least affecting, about a bank manager who finds comfort in his obsession with Jane Goodall when he has to do a difficult task. The writing was good, but the story felt disjointed, and at the end I was, like one of the characters, utterly unmoved.

Overall however, the collection is a strong one. The simplest of details — a violin in “Wolf,” a lost magic trick in “The Floating Wife” — take on much significance, and Fagan’s writing teases your mind with so much that is deeply felt, but left unsaid.