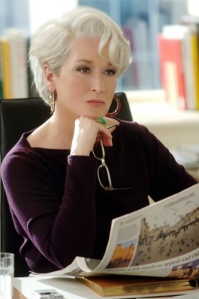 I have a confession to make. When I say I love The Devil Wears Prada, I’m really talking about the movie. I did read the book, and I do remember liking it. But when I squee in delight at the idea of a sequel, and beg the publisher for a review copy, well, it’s the elegant, formidable Meryl Streep that’s in my mind. Seriously: an icon. And while I can barely remember the book apart from the movie, this sequel makes me think the author has a lot to thank the filmmakers for.

I had high expectations for Revenge Wears Prada, and the book was a disappointment. Biggest problem: too much Andy, not enough Miranda. My mom originally bought me the first book because she thought that as an aspiring writer myself, I would relate to Andy. I did see myself in Andy, the wide-eyed fashion don’t who dreamed of a byline in the New York Times, but it was Miranda who made the story such a cultural icon. When I heard of the sequel, set ten years after the events of Devil Wears Prada, and the book blurb hinted that Miranda may be plotting something diabolical for Andy, my first thought was disbelief that someone like Miranda would waste her time on someone so insignificant. (To the Miranda in my mind, no one really was worth wasting her time on.) Still, I figured if anyone can come up with an epic revenge plot, it would be Miranda Priestly. Unfortunately, and this may be more the marketing department’s fault than the author’s, there was no epic revenge plot and Miranda was barely even in the book. The few scenes she was in, she dominated, and each time I kept wanting to delve more into her story. Each time, however, the story shifts away back to Andy’s life now, and I keep wondering where Miranda went. 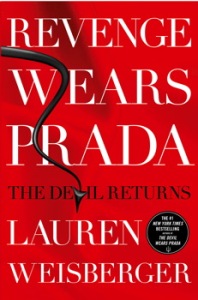 Again, part of that might be because I have Meryl Streep’s Miranda Priestly in mind rather than the character Lauren Weisberger originally wrote. As one of the interviewees in the Devil Wears Prada DVD extras points out, Meryl Streep has a natural seductiveness to her — even when being the boss from hell, she still manages to draw people in. So, when in Revenge Wears Prada, Andy suffers from PTSD-type symptoms from her experience, I felt like telling her to get over it. At one point, Emily tells her Miranda was a horrible boss, but hardly “the devil incarnate” and Andy scoffs at that, as presumably should the reader, but this reader at least agrees with Emily. Sure, Miranda’s demands were unreasonable (the unpublished Harry Potter manuscript!), but really, after a decade, to still be having nightmares and to still go into panic attacks at the thought of encountering Miranda again? Andy: seek help.

In Revenge Wears Prada, Andy and Emily have teamed up to create The Plunge, a high end, aspirational wedding magazine. It is so successful that Miranda Priestly wants to acquire it for her own publishing company. Emily is thrilled at the opportunity and the sales price, but Andy can’t deal with the thought of working for Miranda again. It’s a fairly straightforward business proposal, where Andy and Emily deal more with Miranda’s lawyers than with her directly, and calling it “revenge” just raises expectations for something juicier. Instead, the story focuses more on the character of Andy, who is married now and expecting a child. She is also dealing with a (mostly absent from the story) mother in law who doesn’t like her, a fear that her husband may have been unfaithful, and a strong attraction to an ex-boyfriend. All this is an okay story, but Andy just isn’t a compelling enough character to propel it to greatness.

There are also some niggling plot holes and inconsistencies. I can accept Andy being unable to break into the field of investigative journalism, but a high end wedding magazine requires a completely different skill set (more visual, highly tuned to designers and all the artistic touches), and it’s quite a stretch to imagine Andy having developed that skill.

Revenge also includes a cameo by Rafael Nadal, a thinly veiled reference to Anna Wintour’s friendship with Roger Federer. The problem is, anyone who’s heard even a single Nadal interview knows he would never be that smarmy. He sounded more like a sleazy salesperson than anything, and I doubt Weisberger was able to capture even the more polished Federer’s cadence.

Thank you to Simon and Schuster Canada for a copy of this book in exchange for an honest review.