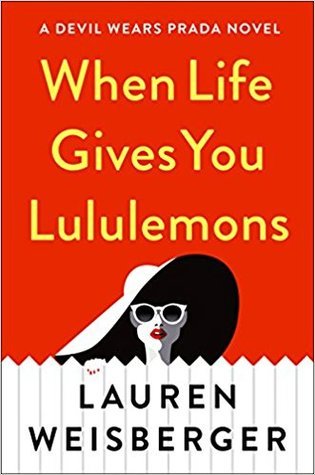 After Meryl Streep’s Miranda Priestley, Emily Blunt’s Emily Charlton is probably my next favourite character in Devil Wears Prada. Who can forget the iconic line “I’m just one stomach flu away from my goal weight.” Weisberger’s earlier sequel Revenge Wears Prada fell flat for me, but I figure if anyone could save the series, it would be Emily Charlton. And When Life Gives You Lululemons certainly lived up to its promise.

Emily, now an image consultant to the stars, lands the A-list client she needs to save her career: supermodel Karolina Hartwell, who was just arrested for a DUI in a Suburban filled with children. The catch is that Karolina lives in Greenwich, CT, and the suburbs are definitely out of Emily’s comfort zone. The stakes are raised because Karolina is married to a senator, Graham, who has no qualms about throwing his wife under the bus to protect his aspirations towards the presidency. Connecting them is mutual friend Miriam, a former high-powered lawyer who is now a stay-at-home mom dealing with all the social pressures of suburban life.

I had so much fun with all the soapy drama in this story. Emily is just the snarky, over-the-top heroine the Devil Wears Prada series needs. I also loved the scheming, revenge-filled storyline of Karolina and her husband. Graham’s an absolute ass and I was cheering so hard for him to fail the entire time. I also found it hilarious how Emily was forced to rethink her strategy of merely saving Karolina’s reputation so that she could actually give Karolina what she wanted — custody of her son.

In the midst of all the over-the-top plot points, what really stands out to me is the strength of the friendship between the three women. The story is hilarious and entertaining, but there are also a lot of deeply felt emotions running throughout. I was cheering the women on the entire time. Miriam in particular is a standout character for me. I love how she feels like she’s settled in the life she’s chosen yet can’t help feeling like something’s missing, and I love how this causes tension in her relationships. She felt the most real and relatable of the characters, and I absolutely love how her subplot turned out.

Finally, I love how Weisberger included Miranda in this story. Unlike Revenge Wears Prada which focused a lot on Andy’s PTSD-level fear of running into Miranda again (which after ten years, seems a bit much for what she went through), When Life Gives You Lululemons shows Emily as more than a match for the devil herself. Emily is clear on the dangers of being sucked back into Miranda’s world, but she’s also savvy enough to figure out how to use Miranda’s skills and connections to her advantage. When Emily says she may have to sell her soul to the devil to save Karolina, we are still confident she can handle anything Miranda throws at her. The book puts Emily toe-to-toe with Miranda for a while, and it’s glorious.

Someone please make a movie of this book already! I’d love to see Emily Blunt and Meryl Streep bring this story to life on the big screen!

Thank you to Simon and Schuster Canada for an egalley of this book in exchange for an honest review.