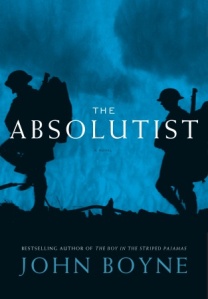 It takes great courage to fight for your country, but sometimes it takes even greater courage to refuse to fight. An absolutist, according to Corporal Wells, a character in John Boyne’s The Absolutist, goes “one step beyond conscientiously objecting.” I’ve heard of conscientious objectors — conscripted soldiers who are morally opposed to fighting in a war, and therefore opt to serve their country is less violent ways, i.e. working in hospitals. An absolutist, on the other hand, Wells says, is “at the far end of the spectrum… He won’t do anything at all to further the war effort. Won’t fight, won’t help those who are fighting, won’t work in a hospital or come to the aid of the wounded.”

A long time soldier, Wells considers absolutism as “cowardice on the most extreme level,” and on one hand, it’s easy to see where he’s coming from. Here are men risking their lives every day to fight the Great War (World War I, before the world even dared consider the possibility of a World War II) and keep their country safe — it’s completely understandable that they would resent those who refuse to fight and therefore stay away from enemy fire. On the other hand, for someone who truly believes that anything to do with the war is immoral, there is also much courage in being able to look at your fellow soldiers, all of whom are pressuring you to join in, and just say no.

When I first read the publisher’s description of The Absolutist, which says that a soldier, Tristan, has a secret he is working up the courage to confess to the sister of his fellow soldier Will, I thought that the big secret was going to be that Tristan and Will have a romantic relationship. (I’m not posting a spoiler one way or the other; this is just what I guessed would happen from the publisher’s description.) The story, after all, was set at a time when there was still a social stigma against homosexuality (sadly, that stigma still hasn’t been completely eradicated). Boyne does touch on the difficulties of being in love with a fellow soldier of the same sex, and I love how faithful he is to the language of the era. Delicate rather than overt, much like E.M. Forster’s suggestion of same-sex romance in A Passage to India, Boyne’s writing emphasizes how much Tristan has to hide his sexuality, even as other characters are free to broadcast their homophobia.

However, The Absolutist shows that there are much more dangerous confessions than coming out as gay. While being gay is seen by the soldiers in the novel as an object of ridicule, being an absolutist is viewed as a betrayal. Will is conscripted into the army and from the very beginning, launches formal proceedings to be recognized as an absolutist and released from military duty. There’s something appealing about his being so honest about his intentions, especially in the world of confusion and chaos of the Great War. And when he witnesses something so terrible he demands justice, you realize how heroic he is.

Yet the best thing about Boyne’s writing is that he offers no easy answers. While we applaud Will’s unwavering morality, Boyne also immerses us in the atmosphere of horror and fear that the other soldiers endure. In one scene, Tristan is talking to a fellow soldier when “I am immediately rendered blind by what feels like a bucket of hot mucus being chucked in my face.” The other soldier has just been shot in the head, “one eye completely gone — somewhere on my person, I suspect — the other hanging uselessly from its socket.” Just reading that made me shudder — I don’t even want to imagine how it would feel to live it day after day after day. How can I blame the soldiers who resented Will refusing to take part in any aspect of the war effort? Yet how can I accept how horribly they in turn reacted to Will’s objection?

What is cowardice? What is heroism? When you’re down in the trenches, should your loyalty be to an idea or to people? Where is the line between understanding someone and excusing his behaviour? The Absolutist raises more questions than it answers, and creates a web of morality that is as ambivalent as it is realistic. And the moment when we learn Tristan’s secret — and his motivation behind it — is, for me, probably the most heart wrenching scenes in the novel. A powerful ending to a very complex tale.