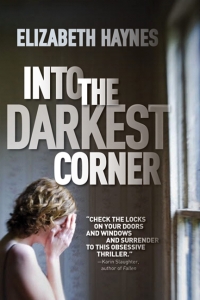 Quite possibly one of the worst things about being the victim of a crime is feeling judged yourself. It’s perfectly natural to think of your own actions and agonize over how you could have prevented the crime, or how, if circumstances were different, you might’ve escaped it altogether. Among the most empowering things, therefore, for a victim of crime to hear, apart from that the perpetrator has been caught, are “You’re not alone” and “It’s not your fault.” Some are fortunate enough to learn that right away, others need a bit more time. But what if you don’t hear that at all? What if the people you trust the most tell you that you are at fault, that in fact, you are lying and not a victim of crime at all? When Catherine Bailey, the heroine of Elizabeth Haynes’ debut novel Into the Darkest Corner, calls herself “such a fool” for not having escaped an abusive relationship with Lee when she had the chance, I wanted to hug her and tell her not to blame herself. When she thinks about how her parents’ death led to her going to bars, flirting with strangers and eventually meeting Lee, I wanted to tell her that it’s useless to dwell on the what if’s, that in fact, her anger should be towards Lee and not towards herself or her past. I wanted to be the friend she so clearly needed.

Into the Darkest Corner is a difficult book to read, and I mean that as a testament to how amazing it is. Haynes has crafted a terrifying, emotional, claustrophobic story of abuse. My copy (photo on the left) is filed with Post-It notes and marginal scribbles, mostly comments like “Argh! You liar!” referring to Lee. Rarely have I marked up a book so much — Darkest Corner has provoked that much from me.

I detested Lee from the very beginning. The novel opens with Lee’s trial in 2005, where he testifies that Catherine was an emotionally unbalanced girlfriend whose obsessive jealousy caused him to snap and punch her — the “first time [he’d] ever hit a woman,” and allegedly an act of self-defense. This may be because I already knew from the book’s back cover that Lee was the jealous one with a “darker side,” but this scene just made me sick. How dare this man not just beat up his girlfriend but now try to paint her as the one at fault?

The novel is structured so that the story of Catherine and Lee’s developing relationship in 2003 (pre-trial) is told in alongside (in alternating scenes) the story of Catherine in 2007 (post-trial). It took me a while to get into this structure, mostly because I felt I already knew how the 2003 storyline was going to turn out, and I wanted to get on with the rest of the story. I soon found myself liking Haynes’ choice of structure however — the scenes of Catherine being carefree and flirting with the handsome, mysterious Lee are especially heart-wrenching when contrasted with the perennially frightened Catherine in 2007, who suffers from OCD and practically has to be dragged to the office Christmas party.

Even when Catherine was really in love with Lee, I never found him attractive. There was a major red flag from the beginning — Lee’s secrecy about his job — though I guess I could see how that would have a dark, brooding stranger type appeal. I do wish I saw a bit more of Lee’s charming side, just so I can understand how Catherine could have fallen so hard, and how her friends could have been so won over.

I have rarely detested a character as much as I do Lee. He’s just creepy and controlling. For example, he switches around the knives and forks in Catherine’s kitchen drawer. When Catherine demands to know why he did it, he replies, “I just wanted you to know I was looking out for you.” Catherine admits she feels uncomfortable without knowing why, and that was one point when I wanted to just yell at her — how can you not know why that creeps you out? Talk about the heebie-jeebies! To Catherine’s credit, she does ask him not to do it again instead of just letting it alone.

Haynes does an amazing job of putting us in Catherine’s frame of mind. It was terrifying to see Lee’s controlling tendencies escalate, to the point that even when Catherine realizes how much she needs to escape this relationship, it’s already too late. Several times in the margins, I’ve written “how to escape?” The story at times felt claustrophobic — Catherine’s experience of being trapped by Lee felt so real that even I, who knew he’d be convicted in 2005, saw no way out.

In contrast to Lee is Stuart, Catherine’s neighbour in 2007, who is a psychologist and who wants to help her deal with her OCD. I was initially put off when he tells her she has OCD and asks if she’s gotten any help for it. I knew he was trying to be helpful, but I also wanted her to tell him it was none of his business. Still, she does need help, and I like how Haynes balances out Catherine’s wariness of Stuart with her desire to get better. Stuart gradually grew on me — I love how, despite his attraction to Catherine, he is first and foremost a friend. I kept wishing that he wouldn’t turn out to have some hidden agenda, that he really is as nice a guy as he seems. Lee is such a horrible, manipulative person, and the way he destroys Catherine is painstakingly, painfully methodical. Because Catherine’s relationship with Stuart unfolds in the book alongside her experiences with Lee, it is difficult to allow ourselves to trust Stuart, just as it must have been for Catherine as well.

I found Into the Darkest Corner difficult to put down as well, but more than that, I found it difficult to read. Catherine’s story gets into you, in a way the very best books — of any genre — do. Catherine battles not just Lee the person but, perhaps more difficult, Lee the memory, which haunts her even after Lee is behind bars. I cheered every time Catherine fought back. I wanted her to win, to beat Lee once and for all and finally get on with her life, even though I knew that no matter what, the scars left by her experiences will never fully go away. Catherine’s story feels real, ever last terrifying, tragic bit of it, and kudos to Haynes for not holding back on such a difficult subject. Brilliant book, one that will stay with you long after you’ve finished reading.

Thank you to Harper Collins Canada for an ARC of this book in exchange for an honest review.

13 thoughts on “Review | Into the Darkest Corner, Elizabeth Haynes”