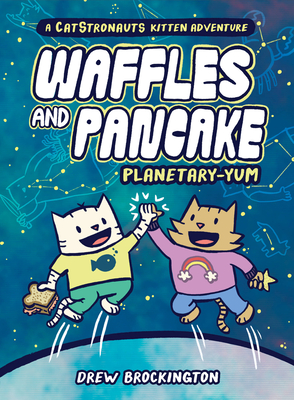 Waffles and Pancake: Planetary YUM is an adorably nerdy graphic novel for children (ages 6+), that takes us back in time to when Waffles, the brave-but-hungry pilot from Drew Brockington’s Catstronauts series, was a kitten. In Planetary YUM, Dad-Cat takes Waffles and his sister Pancake to the big city science museum, where they learn about dino-cats, constellations, and the science behind hairballs. But then the kittens get separated from Dad-Cat, and face the possibility: what if they’re stuck in the museum… forever?

I love cats, space, and museums, so this graphic novel just straight-up made me happy. The illustrations are adorable, and I love how excited the kittens got over the tuna melt and star tots at the museum cafeteria. The museum visit includes fun highlights — the 4D hairball display was hilarious, the section on constellations was both educational and adorable, and, knowing that Waffles grows up to become a catstronaut, the part where they learn about Neil Pawstrong’s moon landing was especially exciting. How many kids will read this book and realize how much they want to work in space, or at a museum? Lots, I hope!

I also love how casually the book mentions Cat-Dad and Cat-Mom being separated. I’m old enough to remember how big a deal it felt seeing divorce represented as no big deal in The Baby-Sitters Club, so I’m glad that even younger readers can now see it in books such as this.

Even more awesome is how much the author’s love of space shines through! Drew has flown a Space Shuttle, repaired the International Space Station, and served in Mission Control; all during a week at Space Camp.

I love space so much, but I don’t actually work in the space field.  My brother, however, excelled in the sciences and went on to become an actual rocket scientist. I don’t get to see him much, but when I do, we often swap knowledge about what is happening in the fast changing world of space.  As an adult, he took me on a tour of the Smithsonian Annex museum where Space Shuttle Discovery is housed. That was probably the most amazing tour I’ve ever been on.

Tough question. I would sleep over at the Intrepid Air and Space museum in New York.  It was the Enterprise Space Shuttle, a Mercury Capsule, and so many great aviation pieces. Also, the museum is a decommissioned Aircraft Carrier, so not only do I get to sleep in a museum, but I also get to sleep on a giant ship. Bonus!
My favorite constellation is Ursa Minor! Finding Ursa Major is so easy, but I still have to struggle to find Ursa Minor in the night sky. When I finally find it, I get so excited.  I’m really trying to learn more constellations for star gazing.  So far, I only can identify about 5, but hopefully I’ll be able to add more to that.  Knowing your constellations helps make the night sky seem less enormous. There’s a comfort in always knowing that they’re there.
+
Thank you to the publisher for an e-copy of the book in exchange for an honest review.