Songs of Love and War feels a bit like Downton Abbey with ghosts in early 1900s Ireland. The story centres around Castle Deverill, a stately estate that’s been passed down through generations of Deverills over time. It also houses a curse: in 1662, Lord Deverill took the land from the O’Leary family, and Maggie O’Leary cursed him and his descendants to eternal unrest until the land is returned to her family.

Kitty Deverill is the feisty, tomboyish heir to the Deverill fortune. She is friendly with the castle ghosts and is much closer to her grandmother than to her rather distant parents. Her best friend Bridie Doyle, is the daughter of the castle’s cook, and is secretly in love with their mutual friend Jack O’Leary even though she knows he’s above her station and she has no chance with him. As they grow older, Kitty begins to fall for Jack herself, even though she knows he’s an unsuitable match, and their relationship leads to irreparable consequences on Bridie’s life and her friendship with Kitty.

Songs of Love and War started off a bit slow for me; the childhood scenes in particular felt plodding. But once Kitty and Bridie grew up and the drama set off by Kitty and Jack’s feelings for each other, Songs of Love and War became utterly engrossing and a perfect book to lose oneself in. It’s an unabashedly soapy fun read, and it also delved into a very gripping part of Irish history. It was fascinating to read about the class and political tensions between the Irish (Jack and Bridie) and the English Irish (Kitty and the Deverills), and I loved the parts where the characters got involved in the rebellion.

Songs of Love and War is the first book in a series. The events of this book have scattered the characters to other continents, and there’s also another major series character, Celia Deverill, Kitty’s cousin whose impulsive actions have put her high society marriage in jeopardy. I’m excited to read the next book in the series to find out what happens to Kitty, Bridie and Jack, and also hopefully to get more of Celia’s story.

Celebrate historical fiction with the Timeless Tour, from April 16 – May 4! 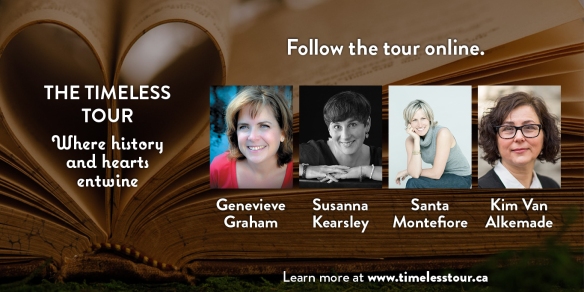