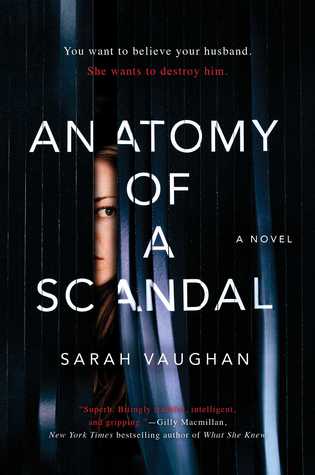 With all the present-day stories coming out about sexual harassment in the workplace, Anatomy of a Scandal is a timely novel about a government minister accused of rape by a female co-worker. The co-worker Olivia admits she had a consensual affair with James, the government minister and a married man, but alleges that he raped her in an elevator after the affair ended. Anatomy of a Scandal follows the stories of James’ wife Sophie and the prosecuting lawyer Kate during the fallout of the accusation.

Concurrent to the story of the court case are flashback scenes to 1992, when James and Sophie are both students at Oxford University and just starting to date. Central to this storyline is a shy student named Holly, who becomes Sophie’s study partner, and the careless antics of the Libertines, a group of rich young men that includes James and his best friend Tom. James and Tom harbour a secret from Oxford that bonds them together as James grows up to become a government official and Tom grows up to become Prime Minister. When the scandal involving Olivia breaks, the incidents of the past threaten to be brought to light.

This is a very timely, and at times cathartic, read. The promotional blurb — “You want to believe your husband. She wants to destroy him.” — is somewhat representative of the story, but in no way encapsulates the full breadth of psychological responses in the characters. The dichotomy between what Sophie and Kate want isn’t as clear-cut as the blurb suggests, and the story is far more than that of a loyal wife and avenging attorney.

Instead, Anatomy of a Scandal peels away the various layers among the women in James’ orbit and slowly reveals the various ways in which his actions have lasting consequences even long before the trial itself. The novel explores the idea of privilege, how it ebbs and flows throughout one’s lifetime and how dangerous it can be when left unchecked. As the prosecuting attorney out for justice, Kate is the more obvious heroine in this novel, yet it’s Sophie’s quieter conflict that really drew me in. I loved reading about her responses to the trial, and how any hint of doubt about her husband is buried deep between the lines for much of the story. I love how she grows through the events in the story, and how she struggles to find her voice after so many years of being defined as a wife and mother, and I love how she comes to realize the subtle elements that influenced her decisions around her family. Sophie is the heart of the book, a reminder of the ways in which women internalize pain and a welcome example that heroism can take place in the quietest of ways.

Kate has her own vulnerabilities as well. As we learn more about her story, we begin to understand why this trial is so important to her, and why she is so passionate about bringing James to justice. We realize that she lives with a complex history of her own and, unlike Sophie’s more easily apparent sort of vulnerability, Kate’s is lightly concealed under a veneer of power that she’s worked hard to cultivate. While her story wasn’t quite as compelling to me and some of her decisions were questionable, she also provided a welcome form of catharsis, and I like how she handled the courtroom battle.

Both are strong, complex women, and both are impacted in different ways by James’ trial. Anatomy of a Scandal is a fast-paced, entertaining legal thriller that posits the question of how far privilege extends and at one point does it end.

Thank you to Simon and Schuster Canada for an advance reading copy in exchange for an honest review.