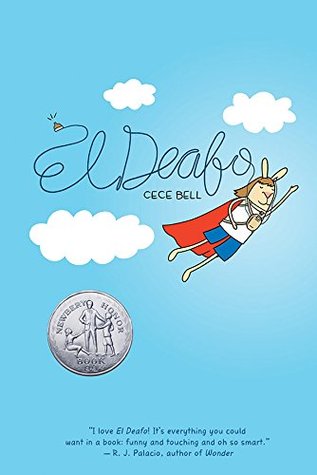 I love, love, love this book! El Deafo is about a deaf bunny named Cece who is self-conscious about wearing her Phonic Ear (a hearing aid strapped to the chest and connected to a microphone) at school, and creates a superhero persona, El Deafo, to gain confidence in making new friends. Cece’s story is inspired by the childhood of the author, Cece Bell, and while the events and characters may have changed somewhat, the author’s note maintains the Cece’s emotions are based on how Bell often felt as a child.

It’s a funny and entertaining story, with a light humour that belies the depth of emotion being conveyed. I was moved by Cece’s desire to fit in, and by her experience of always being different in a way that she can’t hide. Her self-consciousness about her hearing aid and worry that people were staring at her are emotions that many readers, whether deaf or hearing, can relate to, and my heart broke just a little every time she thought she found “a true friend”, only to lose the friendship because of one snag or another.

I think this story will appeal to many ages; I found myself relating to Cece’s desire for belonging even as an adult. I cringed whenever she had an embarrassing misunderstanding, I felt bad when a friend she really liked stopped wanting to see her, and I got all giddy when a cute guy moves into her neighbourhood. The illustrations are adorable, and I especially love it when Cece literally goes heart-eyed around the cute guy, and conversations around her turn into gibberish because she stops paying attention.

People at school aren’t overtly mean to Cece, and I appreciated seeing how even well-meaning people can make mistakes when engaging with deaf people. For example, some of Cece’s classmates speak slowly and loudly to her when that doesn’t really make them easier to understand, and only serves to make Cece feel self-conscious that they’re talking differently to her than to everyone else. Or a friend realizes Cece isn’t quite following a TV show, and so turns up the volume, when really all it does is make the nonsensical sounds from the TV just sound louder, but still nonsensical. (Fun fact: soap operas are easy for Cece to follow because the actors often speak directly to the camera, and in close up.)

There are also things Cece’s friends do as hearing people without realizing that it would pose a challenge to her. For example, Cece finds sports challenging, because multiple people shout instructions at her, and she may not always see their lips clearly or know where to turn. Or at a sleepover, Cece’s friends continue chatting after lights out, without realizing that she can no longer see the conversation. There’s also a cringe-worthy, yet all-too-possible, example of a girl who befriends Cece and constantly introduces her to other girls as “my deaf friend.” This girl doesn’t intend to be mean, but we see how much it hurts Cece to be known as just “the deaf girl.” At one point, she decides to aim for really high grades so that she could become known as the smart girl rather than the deaf one.

I read this book as a hearing person and can’t say how a deaf or Deaf reader will respond to this book, but I hope that they may see some of their own experiences in Cece, and also be moved by the story. The story is based on lived experience, though Bell is careful to note that her experiences are unique to herself and in no way represent the experiences of other deaf peopleHer Author’s Note is also a great primer on deafness and on Deaf culture. She also notes that because she learned speech before she became deaf, her parents “were able to make decisions for me that kept me mostly in the hearing world,” and while fascinated by Deaf culture, she has “not, as yet, pursued a direct role in it.” As a hearing person, I found this very informative, particularly as it provides some context for how her experience as a deaf person who reads lips and uses a hearing aid is located within a much larger range of experiences of deafness.

This is such an entertaining, informative, and moving book. It won the Newbery Honor in 2015, and the Eisner Award for Best Publication for Kids (ages 8-12), and I can understand why. I highly recommend it for readers of all ages, and it’s a great book for parents and teachers to share with children.