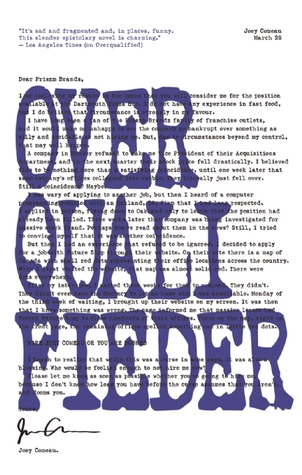 Looking for a job has got to be one of the most stressful things to do. You’re selling yourself to dozens of companies, polishing your resume to an impressive sheen and trying to craft dozens of versions of the perfect cover letter that you know will catch the eye of prospective employers. How often have you written the nth cover letter and been tempted to just say, screw it, and pour out all your pent up frustrations on the page?

Overqualifieder is Joey Comeau’s response to that experience, a collection of job application cover letters by personas Comeau has created. Each letter is like a bit of flash fiction, where the letter writer begins by asking for a job then ends up veering off into venting about his personal life. Unlike the first volume, Overqualified, this book is simply a collection of letters without a hidden narrative. I personally would have preferred a hidden narrative — some of the letters are amusing, but after a while begin to feel repetitive. As a collection of unrelated letters, the book is likely designed to be dipped into once in a while rather than read from cover to cover, but even then, each letter feels like a one-off chuckle at best.

That being said, some of the letters are amusing. For example, a letter to “Security Services” starts off saying that the writer supports their policy not to hire convicted thieves, then ends up with the writer confessing to murdering a friend. Comeau writes:

I am a man of my word, and I have strong convictions. You will not find a more honest and trustworthy employee anywhere. I murdered Jimmy with a kitchen knife, and I would do it again. [p. 46]

In another letter, this time applying to be a freelance journalist at The Herald, Comeau writes:

My major publication credits include small pieces in the New York Times and the Observer. I worked as an intern with Forbes magazine for whatever you consider an impressive amount of time. I just recently finished a brief stint working as copy editor of [THE BIGGEST NEWSPAPER I CAN THINK OF — the Wall Street Journal? Will they believe that?] [p. 47]

Others fall flat, at least for me. For example, an application to Disney for any position, says:

Yesterday was my three-month anniversary of looking for work, and my dad says that I can’t find a job because I’m not a gay, crippled immigrant, so you can understand why it’d be nice to move out. [p. 9]

Comeau’s personas range from desperately under-qualified applicants to thieves and killers, and I found the letters mildly amusing overall, with a couple that are hilarious or incisive. This book will likely strike a chord in anyone who’s ever been frustrated while job hunting, but I think Overqualified may be a better read, just because a hidden narrative may make it feel less repetitive.

As an aside, kudos to the cover designer of this book. I love the cover!

Thank you to ECW Press for a copy of this book in exchange for an honest review.