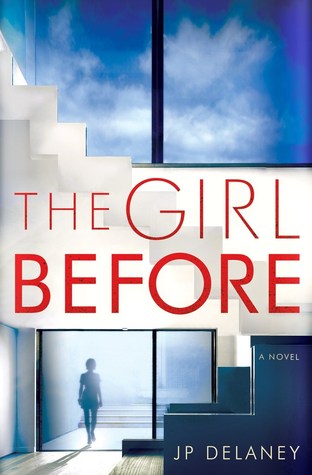 One Folgate Street has won architectural awards and is filled with state of the art technology for the ultimate living experience. There are only two catches: first, there’s a 200 question application form and interview, with the architect having veto power over potential tenants; and second, there’s a list of rules you must follow to remain a tenant. Leave no clutter on the floor, allow the architecture firm to track your biometric data to help them optimize the living experience for future tenants.

It sounds like the beginning of a futuristic sci-fi thriller, but The Girl Before is set in the present day, with an architect that’s super handsome and talented, but the most controlling and anal retentive man in fiction since Christian Grey brandished his leather whip. Unlike Mr. Grey however, there is nothing remotely seductive about Edward Monkford, and his demands seem more a pathological inability to deal with clutter than a desire to be dominant. It’s certainly not a house I can live in, architectural awards be damned. Even the Internet is controlled, with a customized browser that provides a more filtered list of search results than Google.

Yet it’s an irresistible lure to persons who desire to have more control. The Girl Before tells the story of two such tenants: Emma who was robbed at knifepoint at her old house and is reassured by the extensive security measures of One Folgate (you unlock doors with a cellphone app, and no one else — except for the architect — can enter without your approval); and Jane who recently lost a child. Jane then learns about the previous tenant’s mysterious death, and unknowingly falls into the same pattern of behaviour. As both women’s stories unfold, we see how the house and the men in their lives play a part in propelling them both to a potentially shared destiny.

The story starts off very strong. Delaney does a good job in establishing the creep factor with both Edward’s brand of charm and the house’s oppressive nature. As Jane works around the house’s security (read: censorship) features to learn more about her predecessor’s life and death, various plot threads twist and unravel, so that we gradually get a fuller picture of characters we thought we already knew.

The big reveal was a bit of a disappointment. I can understand Delaney’s decision as a thriller writer to turn the story in that direction, and I appreciate how the author shows multiple kinds of menace. But it almost felt anticlimactic and one of the characters seemed full of wasted potential. (See my thoughts on the ending below for more details. IGNORE if you want to AVOID SPOILERS.)

Overall, The Girl Before is an entertaining, fast paced thriller that’ll keep you turning the page and guessing about what happens next. The house with its oppressive set of rules and stifling fancy technology is a great setting and easily keeps the tension ratcheted up throughout.

Thank you to Penguin Random House Canada for an advance reading copy in exchange for an honest review.

***SPOILER*** My Thoughts on the Ending

I felt the character of Edward Monkford was wasted at the end when it turns out that Simon was the murdered. Edward was set up as such a creepy controlling potential psychopath, and so having him turn out to be innocent (still creepy, but not a murderer) kinda just made him feel lame at the end. Simon as the bad guy wasn’t completely unexpected — many women know how dangerous that “nice guy” puppy dog type of man can be — and I actually appreciated that Delaney tackled this type of bad guy, but I wish we’d had more of a sense of menace from him earlier on, so that when he’s revealed as the killer, there’s a bit of relief at knowing he was unveiled. Instead, it felt somewhat anticlimactic.

7 thoughts on “Review | The Girl Before, J.P. Delaney”