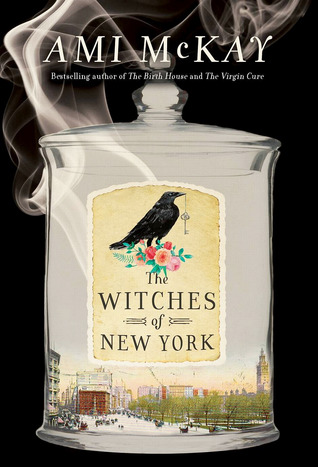 The Witches of New York is an entertaining read, about two witches who take a third, young yet powerful witch under their wing in 1880s New York. Adelaide Thom (Moth from McKay’s earlier book The Virgin Cure) and Eleanor St. Clair operate a tea shop that doubles as an apothecary and fortune telling space. It’s 200 years after the Salem witch trials, but religious fervour forces them to keep their powers under wraps. Chance, destiny and a touch of magic conspire to bring Beatrice Dunn to their door seeking employment, and the novel goes on to chronicle her development as a witch and the three women’s conflict with a rather obsessive evangelist on a killing spree.

The book reminded me somewhat of the TV show Charmed, when Rose McGowan joins the cast as a new Halliwell sister, completing the gap eldest sister Prue’s death left in the Power of Three. Similar to Rose McGowan’s role, Beatrice’s arrival appears to complete the circle of power among Adelaide and Eleanor, and I can easily imagine a long-running series of their adventures.

Also similar to Charmed, Witches of New York has a lighthearted feel. Despite the terrible things being done by the villain, there isn’t too much of a sense of danger throughout. We just know these kick-ass women will win at the end; the only question is how. There are also ghosts who mostly want to help them (one ghost, who haunts the tea shop, is presented as a nuisance but I thought she was actually a really sad figure) and fairies called Dearlies who send portentous dreams at night (they had their purpose but were a bit much for me). There is also romance, and that subplot was actually my favourite as I thought it was really sweet.

Overall, this is a fun, quick read whose style reminds me somewhat of Charmed and Practical Magic. If the idea of historical fiction about kick-ass women with magical powers appeals to you, you’ll likely enjoy this book. And if you enjoy reading books in a series, the ending leaves some plot threads still loose, so a sequel is likely in the works.

4 thoughts on “Review | The Witches of New York, Ami McKay”