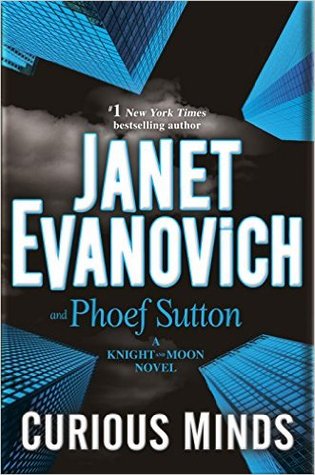 Curious Minds is a mystery-adventure caper featuring a pair of quirky and seemingly incompatible leads that I think may work better on the screen rather than as a book. Without charismatic actors to bring Knight and Moon to life, they just came off as trying a bit too hard to be funny but instead are being a jerk (Knight) or simply annoying (Moon). I’m sure I must’ve read Evanovich’s Stephanie Plum novels before. I seem to remember enjoying them, and I know humour is one of the trademarks of her mysteries, but the humour in Curious Minds just fell flat for me. While the mystery aspect was interesting, it also seemed more set up for a caper type adventure for the leads than an actual puzzle to solve, which makes the characters and the humour much more important to get right.

Curious Minds stars the unlikely duo of Emerson Knight, an introverted, eccentric and handsome billionaire, and Riley Moon, a feisty financial analyst assigned essentially to babysit Emerson when he makes the unusual request to withdraw all his gold from the bank. Riley is highly educated and supposed to be brilliant and super talented, but is surprisingly naive about a lot of things, which I gather is meant to make her cute and endearing. Emerson is rude and condescending, but really does care for Riley in his way, so then sexual tension develops. Bad guys want to keep Emerson from his gold, so Emerson needs Riley’s help. And so on and so forth. There are even Batman-type gadgets thrown into the mix.

A book that follows a standard formula isn’t necessarily a bad thing for me, but this just didn’t quite work. That being said, it was an entertaining story to read, and I think I may have enjoyed it more as a buddy comedy on TV. I’m afraid I haven’t read a Stephanie Plum novel in a while, so apart from a vague memory that I did enjoy that series, I’m not sure how this compares and how Evanovich fans will respond to this. I may pick up a future Stephanie Plum novel, but I think I’ll give this series a pass.