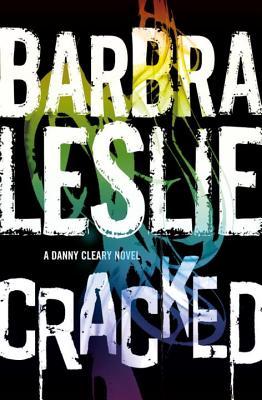 Cracked is a fast-paced thriller about a woman’s hunt for her twin sister’s killer. Danny Cleary is smoking crack in her Toronto apartment when she hears of her twin sister Ginger’s death. She immediately hops on a plane with her rock star brother Darren and flies over to Ginger’s home in California to find out what could have happened. It turns out Ginger’s death could have been drug-related, and the reason Ginger was doing drugs in the first place was to get a better understanding of her twin’s addiction. Things are further complicated when a woman who looks like Danny manages to get ahold of Ginger’s young sons, and Danny begins to wonder if her sister’s death was somehow her fault.

Danny and Darren’s search for the truth takes them deep into a much more complex web than I originally anticipated. Leslie keeps the twists and turns and minor reveals coming, quick and often enough to keep the reader off-balance and wondering what the heck the truth actually was. Danny’s crack addiction plays a major role in the story, as she struggles to stay sober enough to find her twin’s killer, though at one point and surprisingly, giving in to her addiction actually ends up helping her out.

Danny is also a former women’s self-defence instructor, and therefore joins a welcome and ever growing list of kick ass heroines who can disable a bad guy with a single blow. I especially like that despite Danny being really good at fighting, Leslie still manages to keep it realistic, so that Danny isn’t so much super powered as just really good at strategizing and at taking advantage of the element of surprise.

I also really liked how Danny’s love for her twin sister is so evident on the page. It forms her main motivation throughout the book, and it’s her loyalty to her family that fuels all her ass kicking. So when Danny speaks of her desire for vengeance on whomever killed Ginger, and when Danny goes to great extents to save her nephews, it’s all very much a part of who she is, and Leslie does a great job of creating a character whom you believe will travel across North America and combat her addiction for her family.

The big reveal was actually surprising. By the end, it felt a bit more complicated than it strictly had to be, but to Leslie’s credit, she did keep me guessing throughout. Cracked is the first in a trilogy, and the book ends with a set up for the next one. So if you try this out and enjoy it, keep an eye for the next book Rehab Run, out this November 2016.