Join me and Simon and Schuster Canada for a summer read-a-long of M.L. Stedman’s bestselling book The Light Between Oceans! The book was a bestseller when first published in 2012, and the read-a-long coincides with the movie’s upcoming release in September. Starring Michael Fassbender (OMG heart-eye emoticon!), Alicia Vikander (IMHO the standout performance in The Danish Girl) and Rachel Weisz (The Lobster, The Mummy), the trailer looks like a major tearjerker about love and family.

Michael Fassbender plays Tom, a lighthouse keeper whose wife Isabel (Alicia Vikander) is unable to bear a child full-term. When a baby washes up onshore, it appears that fate has made their dreams of a family come true, and against Tom’s better judgement, they decide to raise the child as their own. Fast forward a few years later and they meet a woman (Rachel Weisz) whose husband and baby daughter were lost at sea years ago. “[Her daughter] would have been your girl’s age by now,” the woman’s sister tells Isabel.

What should Tom and Isabel do? “I’m her mother,” Isabel tells Tom, in a scene that just about broke my heart, but how can they refuse to give the biological mother the chance to reunite with her daughter? There is no easy answer, no way to give everyone a happy ending, and however the story turns out, I’m definitely planning to bring Kleenex into the theatre.

Simon and Schuster Canada’s read-a-long is taking place on Goodreads, and began on July 8. Join the discussion!

This week’s read includes the Preface and Chapters 1 – 5. Full Read-A-Long schedule below: 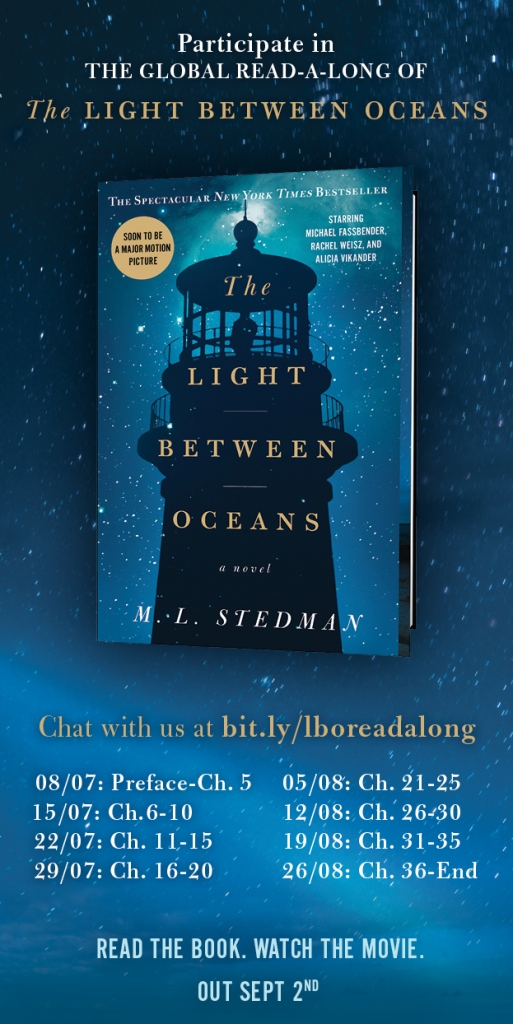 Thanks to Simon and Schuster Canada for a copy of this book in exchange for participation in the read-a-long.