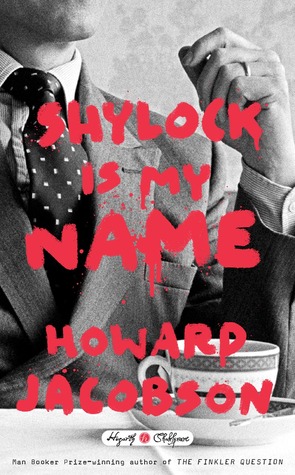 In this modern update to Shakespeare’s The Merchant of Venice, Howard Jacobson finally gives Shylock his chance to vent. The character of Shylock has one of the most powerful, memorable monologues in all of Shakespeare’s plays — “Hath not a Jew eyes?” — yet he is ultimately silenced. He ends the play slinking offstage as the young Venetian protagonists celebrate their happily ever after. Merchant is considered a comedy, with Shylock presumably as the villain, insisting upon an unreasonable demand for a pound of Antonio’s flesh in payment of a debt. The play’s heroine Portia, disguised as a lawyer, makes an impassioned plea for mercy, which Shylock rejects in favour of justice, in this case a contractual agreement for Antonio’s flesh. So on one hand, Shylock does have a cruel streak; yet on the other hand, his being reviled by the other characters isn’t limited to his lack of compassion, but also about his being a Jew. In fact, his unwavering desire for Antonio’s flesh to settle debt recalls anti-Semitic stereotypes, and contemporary audiences are generally more sympathetic to Shylock’s character than the play’s heroes and heroines are.

So having a story where Shylock is finally given the hero’s role strikes me as a welcome form of literary justice, and I was thrilled to get a chance to hear his side. Jacobson somewhat mirrors the basic storyline of Merchant of Venice, but adds a meta layer, with Shylock as a character being in the real world and advising his real world contemporary counterpart Simon Strulovich. The young Venetians are re-imagined as vapid, rather self-centred hipsters, who respond to their privileged lives with ennui. In a sharp bit of satire, Plurabelle (modern Portia) and D’Anton (modern Antonio) meet in a sadness therapy group described as “like Alcoholics Anonymous but for sad rich people.”

Whereas Shakespeare’s play focuses on mercantilist stereotypes of Jews, Jacobson flips the perspective around, with characters like Plurabelle and D’Anton playing with people’s lives to alleviate their boredom and ignoring the very real problems Jews have faced over time. For example, upon hearing that a football player named Gratan, notorious for having given a Nazi salute on the field, is attracted to Jewish women, Plurabelle and D’Anton decide it would be entertaining to set him up with Strulovich’s daughter Beatrice. Jacobson’s portrayal of Plurabelle and D’Anton’s thoughtless manipulation of people’s emotions in pursuit of entertainment is akin to Shakespeare’s portrayal of Shylock’s disregard for Antonio’s health in pursuit of payment.

The infamous pound of flesh is also updated to mean foreskin, i.e. circumcision to signal conversion to the Jewish faith. Strulovich initially requests it of Gratan, as a condition of his continued relationship with Beatrice, and D’Anton offers to take on the debt himself if the athlete doesn’t deliver. This doesn’t quite make sense, but it’s also indicative of how little control Strulovich really has over the situation, a request that originally began as somewhat understandable gradually inflating to ridiculous proportions as fuelled by D’Anton’s penchant for the dramatic. More significantly however, by changing the particular piece of flesh in question, Jacobson brings a lot more of the anti-Semitic subtext in Merchant into the open. It’s not so much a physical wound that the young characters fear as it is that they would have to compromise their, for lack of a better term, non-Jewishness. It recalls a type of scare rhetoric that’s disturbingly familiar in contemporary conversations around multiculturalism and LGBTQ rights, and Jacobson’s story makes all too clear how often it is in these conversations that the loudest voices are from those who least understand what the context is.

I had high hopes for this book, but I wasn’t quite as blown away as I had hoped to be. Partly, it’s because my expectations were raised by the brilliance of Jeanette Winterson’s The Gap of Time, the first title in the Hogarth Shakespeare series to which Shylock belongs, and Shylock just didn’t quite measure up. To be fair, that may be just a result of my personal taste in writing — Jacobson’s prose was just a bit too wordy and pedantic at times to hook me in, particularly in the long, philosophical discussions between Shylock and Strulovich.

The other, more problematic part is that while Jacobson does an excellent job unpacking anti-Semitism and contemporary Jewish experience, I found the storylines around his female characters to be problematic. Strulovich’s relationship with his daughter Beatrice is particularly off-putting — he recalls her at thirteen as being “thirteen in fact, twenty-three in appearance. Luscious.” and that just completely skeeved me out. He is jealous of her boyfriends, in a way that seems more possessive than fatherly, and his description of her behaviour slides into outright slut-shaming at times. I actually cheered when she escaped him to be with Gratan, even though Gratan is a total jerk himself, then found myself seriously concerned when Beatrice later admits missing her father and wanting him to take her back. There’s a lot going on, including Beatrice’s struggle with accepting her Jewish heritage, but there’s a whole lot more that makes me uncomfortable. At one point, Beatrice compares her feelings towards her father to the affinity a captive may have for her captor, and the words strike home.

To a lesser extent, if Merchant did a disservice to Shylock, then Shylock does a disservice to Plurabelle as a reimagining of Portia. Shakespeare’s Portia was subversive, devising a game to exert power in an endeavour in which her father’s will essentially renders her powerless. In Jacobson’s book, the game becomes silly and senseless, and Plurabelle’s actions utterly aimless. Jacobson skewers Portia’s privilege without acknowledging her constraints, and while it’s possible I may not even have been really bothered by this as a stand-alone, when coupled with my feelings over Beatrice’s character, I can’t help wishing that female characters hadn’t been given such short shrift.

Otherwise, I think this is a fascinating, thought-provoking book, and certainly, it’s about time that Shylock got his say.

And just because both performances are so strong, check out Al Pacino:

Thanks to Penguin Random House Canada for a copy of this book in exchange for an honest review.

4 thoughts on “Review | Shylock is My Name, Howard Jacobson”