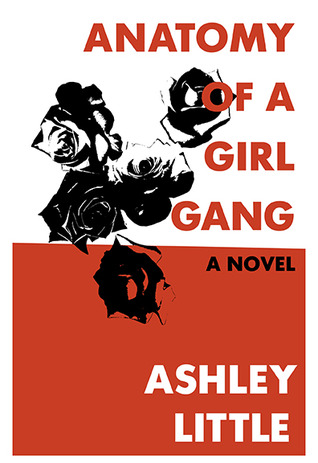 Anatomy of a Girl Gang is a raw, gritty novel, about a gang of teenage girls in Vancouver, told in alternating chapters from each of their perspectives. There is the leader Mac, her second in command Mercy, high school dropout Kayos who is also a single mom from a privileged family, Sly Girl who battles drug addiction, and Z, a graffiti artist. Little succeeds in giving each character a distinct voice and storyline that all somehow come together seamlessly to form a unified tale. Vancouver itself is a character as well, a somewhat maternal voice whose interjections remind us that, despite their bravado, these characters are still little more than children, and vulnerable on some very dangerous streets.

I was completely blown away by this novel, and by these girls’ stories. Mac’s long-term game has always been to save up enough money that they can live in comfort and potentially leave the gang life behind, and the stakes in the novel are raised when a crime places that goal in jeopardy. The blurb in my advance review copy calls the book “a narrative punch to the throat,” and I cannot agree more. It’s raw and powerful, and just absolutely brilliant.

Little pulls no punches — by allowing each girl the chance to tell her own slice of the story, and more importantly by allowing these slices to overlap in spots so that a single conversation can be remembered by two or more characters, the author presents us with a discordant, multi-layered chorus of voices that are never quite in sync but nevertheless create a sort of harmony. Despite the violence and dangers, Anatomy is at its heart about connection and friendship, and I love how the characters find a sense of belonging with each other, and how this connection manages to feel both unbreakable and tenuous at the same time. For example, Mac and Mercy’s best friendship defines the core of their gang, even when one of them inadvertently commits a crime that places the gang in jeopardy, yet the friendship is tested when Mac’s relationship with Z comes to light.

Also, within the current conversations around diversity in literature, Anatomy deserves a shout-out for the relationship between Mac and Z as well as main characters who are Punjabi (Mercy), First Nations (Sly Girl) and Asian (Z).

I cannot recommend this novel enough — it’s powerful and raw and just beautifully written. The range of distinct narrative voices is impressive, and success in pulling it off is a rare feat, so much kudos to Ashley Little for this.

Thanks to Arsenal Pulp Press for an advance reading copy of this in exchange for an honest review.