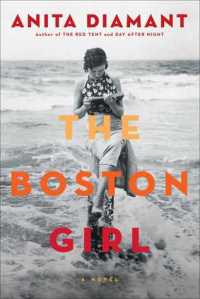 How did you get to be the woman you are today? Eighty-five year old Addie Baum is asked this question by her granddaughter, and thus begins a reflection on a young woman’s life in 20th century America. In Anita Diamant’s The Boston Girl, we learn about Addie’s involvement with a women’s reading society, her battles with sexism in the field of journalism, and her budding romance with her eventual husband.

Diamant has created a cast of memorable characters, and I loved reading about Addie’s family (overbearing mother, saintly yet unhappy sister, all mostly just trying to make the best of life in a new country) and friends (the street smart, artistic best friend, the women fighting for female liberation, a range of women trying to carve a better place for women in general).

The Boston Girl is a lovely, breezy read. The story covers major historical events like World War I and the rise of first wave feminism, yet presents them with an intimate, personal air. We feel much like Addie’s granddaughter, listening in rapt fascination to a woman whose story will likely never be in the history books and yet is part of history all the same.

The rise of feminism is my favourite part of the novel, which may explain my disappointment that Addie’s narration ends more or less with her marriage. On one hand, I like that Addie’s story is probably a more common one for women at the time, and that we have a tale many grandmothers can relate to, rather than a girl power type manifesto. I also know, logically, that of course she’ll meet a man, who will then become the grandfather of the young woman to whom the story is told. Also logically, there’s nothing that says she didn’t continue with her journalistic crusades after marriage. Still, on the other hand, part of me wishes the happy ending had involved making a landmark change in the fight for women’s liberation, rather than settling down into being a wife and mother.

Thank you to Simon and Schuster for an advance reading copy of this book in exchange for an honest review.