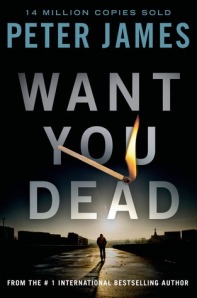 The best part about a mystery series is believing that no matter how horrific the villain is, he will get his comeuppance eventually, because the series hero is so awesome. This is particularly true for Want You Dead, 10th in Peter James’ Roy Grace series. Villain Bryce Laurent is the stuff of women’s nightmares — handsome, rich and charming, until he turns out to be creepy, controlling and obsessed with you. The heroine/potential victim is Red Cameron, a realtor who met Bryce on an online dating site. As the story begins, she has already broken up with Bryce and is unaware that he has been stalking her ever since the breakup, biding his time until he can make her sorry she ever dumped him.

This story reminds me somewhat of Elizabeth Haynes’ Into the Darkest Corner. James doesn’t delve as deeply into the psychological effects of having a stalker, but he does hammer home the horrible point that as much as Red thinks she’s safe, she can never be completely free of Bryce. James, who reminded me of Giles the librarian from Buffy when I met him years ago, is unsettlingly convincing in his description of Bryce’s fantasies for revenge. You will be cheering Roy Grace and his team on all the way through. 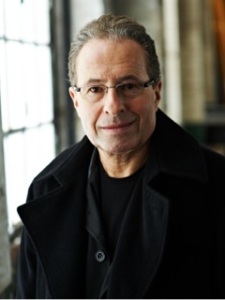 This 10th instalment in the series also brings big things for Roy Grace. (SPOILER ALERT if you’re not caught up to date with the series.) he’s days away from his wedding to the forensic pathologist Cleo, and also utterly unaware that his wife (officially declared dead in an earlier book) is alive and planning to come back into his life. There is a dream sequence I didn’t like — too cutesy a plot device — but overall, it’s great to see Grace preparing to settle down and lead a happy family life. Throughout the story, the wedding and honeymoon are mentioned with Grace’s determination to take the break from his work to be with his new wife. In a couple of scenes, he rejects phone calls from work so that he can focus fully on being with Cleo. I love that — these little details make Grace seem more real as a human being, beyond his skills as a detective.

I devoured Want You Dead in a single weekend. My poor cat was shooting me the side eye for neglecting both him and my chores as I kept turning the pages. It was well worth it, though. And Mr. James — I cheered out loud at the final chapter. Thank you for that ending.

Thank you to Minotaur Books for an advance reading copy of this book in exchange for an honest review.