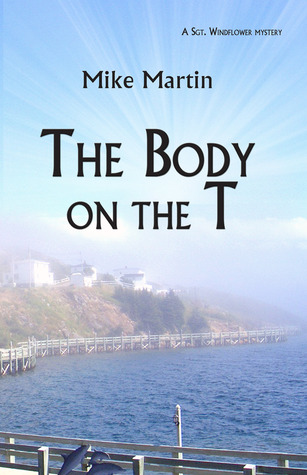 A corpse washes up on a beach in the small town of Grand Bank, Newfoundland and Sgt. Winston Windflower, an RCMP officer and a Cree from Northern Alberta is called in to investigate. In The Body on the T, the second book in the Sgt. Windflower series, Mike Martin strikes a balance between the police procedural and the cozy mystery genre, and presents a small town whodunnit.

With the best cozy mysteries, the place itself becomes a character, and the reader loses themselves in the protagonist’s world. Donna Leon’s Brunetti, Agatha Christie’s Miss Marple, Martin Walker’s Bruno — in all these series, reading the mystery feels like escaping into a different world for a few hundred pages. We get to know the series protagonist — they seem almost a friend, and figuring out whodunnit alongside them becomes a comforting ritual.

Mike Martin makes a pretty solid attempt at creating such a world, and yet falls short. We get interesting anecdotes such as a moose crossing the road and almost causing an accident, and a lovely romance with a coffee shop owner that later has its own dramatic subplot. We get series characters to cheer for — Sgt. Windflower is a duty-bound RCMP officer, his girlfriend Sheila is likeable, and I like the mentor/protege relationship he has with his deputy, Tizzard. There is a welcome touch of diversity in a genre all too often lacking in PoC characters — we get descriptions of Sgt. Windflower’s smudging ritual, and he and the coroner, Dr. Sanjay, have a weekly samosas and Scotch evening, an interesting combination.

Unfortunately, while the characters are likeable, none are particularly memorable. Thus, when a major event puts one of the characters in grave danger, I wasn’t invested enough in that character for it to affect me much beyond wondering what, if anything, this had to do with the case.

Martin also takes his love for detail too far, with, for example, a step by step description of Windflower getting up in the morning. There are also numerous descriptions of meals, lots of delicious smoked cod, but the descriptions lack the mouth-watering flair of Donna Leon’s Paola Brunetti or even Carolyn Keene’s Hannah Gruen.

The mystery itself was a solid whodunnit. There are the usual skirmishes with other departments trying to take over the case and some potential suspects actually being more interesting characters than the series ones. The pacing is slow, which is in line with the cozy mystery genre, yet there aren’t enough other details to keep me hooked in the meantime.

I like the idea of a mystery series set in small town Canada and featuring an RCMP officer. I particularly like the author’s attempts to include details about Cree rituals and small town wildlife, without resorting to tokenism — these details are in the story organically, and I don’t get the impression that he’s checking off a list on showcasing diversity. Still, overall, the story and its characters fell flat for me — not bad, but not particularly compelling or memorable either.

Thank you to the author for a copy of the book in exchange for an honest review.