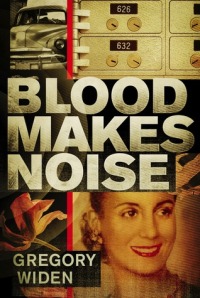 Gregory Widen’s Blood Makes Noise takes its inspiration from a real life event – the death of Argentina first lady Eva Peron and the mysterious disappearance of her corpse. The story is told from the perspective of CIA officer Michael Suslov, who is given the task of first protecting her corpse, and then fifteen years later, bringing the recovered body back home.

Widen’s story is steeped in the mythology surrounding Eva Peron. Most of what I know of her comes from the musical Evita, and we get a similar sense of almost-worship surrounding her in Widen’s book. His portrayal though is most powerful when firmly grounded — in a fantastic scene, he writes about how when it came time for Peron to choose a vice president, and the people called Eva’s name, even as she graciously accepted, she knew she would never be allowed to be vice president. She was too divisive to be a political figure in the public eye, and her crestfallen expression as she realizes this adds dimension to her character.

Unfortunately, I just couldn’t get into the book. It’s penned by the same man who wrote Highlander, and given the epic nature of that storyline, I had high hopes for this one. The requisite elements are there — intrigue, treachery, characters unsure of whom to trust, and so on. Perhaps there was too much focus on the reverence around Eva Peron, and while I appreciate the point about objects and symbolisms being of great significance to Argentineans, the references to Eva as a saint, and her corpse as sacred, seemed at odds with the grittier reality of inter-agency politicking. The politicking as well seemed cursory — there was a Le Carre type mastermind pulling the strings, but he lacked the charisma to be truly compelling. The story itself was slow and hard to get into, and even though Widen did a good job in setting the stage and explaining anti-Peron sentiments in Argentina at the time, ultimately, the story failed to make me care about the condition of Eva Peron’s corpse, upon which all the action hinges.

Thank you to Thomas & Mercer for an advance reading copy of this book in exchange for an honest review.