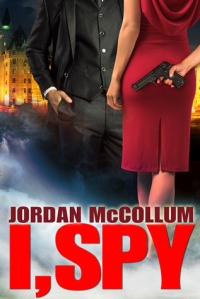 Jordan McCollum’s I, Spy, the first in a series starring CIA operative Talia Reynolds, is an entertaining spy thriller. One doesn’t traditionally associate Canada with high-stakes espionage, so I love that Talia is stationed in Ottawa, and that her department has to coordinate with CSIS. Even more interesting, Talia is a Mormon, yet another detail not traditionally associated with contemporary fiction in general, never mind the spy thriller genre.

In this book, Talia is asked to investigate Russian aerospace executive Fyodor Timofeyev, whom CSIS and the CIA suspect of being a spy. Unfortunately for Talia’s personal life, her investigation requires her to pretend to date Fyodor, both to pump him for information and also to distract him while other agents search his room. This comes at a time when her relationship with her boyfriend Danny is on the rocks, mostly because she has been breaking a lot of dates with him lately for work-related matters. Worse, she’s spending even more time with her co-worker and best friend Elliott, and while the relationship is completely platonic, Danny is starting to get jealous.

I, Spy is a fun, action-packed read. I love the references to Ottawa landmarks, although I do think the author went too far in explaining all the minor Canadian-isms. This may just be because I’m Canadian myself, but when a couple of characters buy coffee and donuts at a Tim Horton’s, I didn’t think it necessary for the narrator to explain that a Tim Horton’s is like a Dunkin Donuts.

McCollum has a breezy writing style, and a talent for describing action scenes. At times, Talia and Elliott almost appear superhero-like in their uncanny ability to dispose of bad guys and get out of bad situations, and at times I wished for more realism, but even glossed up, this remains an exciting read. McCollum saves her realism for the personal subplots — Elliott’s fears about his wife’s pregnancy distracting him from performing his CIA duties, Talia and Danny’s repeated miscommunication and resulting strain on their relationship, and, in the most striking passage in the book, Talia’s raw emotions after being sexually assaulted. While most of the plot features the high-stakes espionage operation, the heart of the story lies in the characters’ personal lives, and McCollum reveals the human side of the operation.

Thank you to the author for a copy of this book in exchange for an honest review.