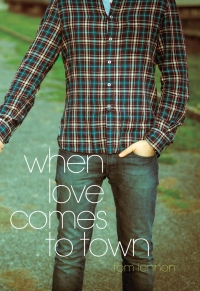 Twenty years after its original publication in Ireland, Tom Lennon’s coming of age, coming out story When Love Comes to Town is being released in North America. In many ways, the story seems a bit dated — characters use public phones and personal ads in newspapers rather than mobile phones and social media, cross dressing men are inaccurately referred to as transvestites, and I sincerely hope that society is at least more open-minded now than the one portrayed in the book. In other ways, however, it’s disheartening to see how many of the challenges Neil faces in the 1990s are still being handled by LGBTQ teens in the 2010s. Perhaps if it were published now, the author, an English teacher at a Dublin high school, wouldn’t have felt the need to use a pseudonym, but then again, perhaps I’m just being naive.

In the Foreword, James Klise says:

The novel reminds us how isolated many gay people felt in the pre-Internet age, before connecting with others was as easy as a click. The isolation was only increased by the near-invisibility of role models […] no gay-straight alliances in schools, no Ellen Degeneres on TV, no uplifting talk in the media about how “it gets better.” [p. vi]

Beyond isolation, the main emotion throughout the story is discomfort. We see Neil struggling with his sexual urges — he’s known since he was 10 that he was gay, but he sometimes wishes for death just so he won’t have to face the consequences of that knowledge. He has a crush on a boy in school, but he joins his friends in checking out girls, and at one point pretends to have a girlfriend. Perhaps most horrifically, Neil still laughs at his friends’ anti-gay slurs just so they won’t suspect that he himself is gay. He’s a gay teen living life as a straight one, and the sensation that something just isn’t right is a strong thread throughout.

Even within the gay scene, Neil is far from comfortable. Lennon writes of Neil’s awkward evenings at gay clubs, trying to figure out the rules. Ironically, Neil is far more comfortable flirting with girls; at least, he’s familiar with that world. One of the men he meets at the club, Uncle Sugar, is a constant reminder of the man Neil fears he could grow up to be — a desperate, rather pathetic middle aged man trying to pick up younger men. While Neil does find a sense of belonging in gay clubs, he is still constantly aware of the need to keep both aspects of his life separate. In some ways, Neil’s finding a space to be himself makes life even more stressful for him. How can he explain when Uncle Sugar calls his house? How should he react when he and his mother run into the flamboyantly effeminate Daphne at the mall? In a particularly telling scene, when two cross dressing men visit Neil away from the club, they make sure to wear business suits, and when Neil’s father runs into them, even have a cover story already made up for how they know Neil. Pretence is a way of life for the gay characters in this book, and the consequences of being out of the closet are all too vicious.

Interesting as well is that even the most open-minded characters still hold prejudice.  Neil’s friend warns him off a potential boyfriend because bisexuals “can’t be trusted,” and nothing in the narration hints at Neil or, for that matter, the narrator, finding this unfair. Neil’s sister accompanies him to a gay club and happily befriends gay men, and yet visibly recoils from gay women. Neil reacts by admitting that if he were a straight man, he might react the same way to gay men. No excuse, particularly by today’s standards, but it does reflect a more conservative time and place, with people less educated about LGBTQ issues. I also grew up in a conservative Catholic country, and I remember as late as the 2000s, a male classmate telling me he had nothing against homosexuality, but gay men made him feel uncomfortable, just as he (mistakenly) assumes gay women must make me feel uncomfortable too. Just as my classmate did, Neil finds this discomfort completely natural, and again, this is indicative how just how much Neil and the other gay characters in the book must have felt they had to hide.

The writing isn’t amazing. There are hardly any nuance to the characters; even the gay men Neil meets at the club are more character types than developed individuals, and even Neil’s inner monologue gets repetitive after a while. Descriptions are fairly standard, though perhaps fittingly, Neil’s descriptions of his crushes sound like bad high school poetry. The book’s strength therefore is not in its writing, but rather in its honesty. This is the experience of a young man in an Irish Catholic school in the 1990s, and Lennon paints a stark portrait of the isolation and fear that entails.