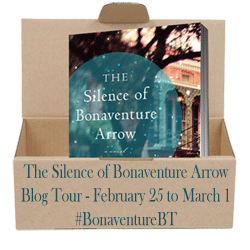 As you’ve seen from my post this morning, The Silence of Bonaventure Arrow was an absolute treat for me to read. For this leg of the blog tour, Harper Collins Canada kindly offered me the chance to ask author Rita Leganski a series of questions about her book. I was thrilled — by the time I finished Bonaventure, it had subverted my expectations so much that I had a ton of questions I wanted to ask!

Q & A with Rita Leganski

1. Why did you choose that particular setting? What was it about New Orleans in the 1950s that you felt suited the story?

While I was growing up in northern Wisconsin, I thought of the South as an enchanted place and of New Orleans as the very embodiment of magic. Like its history, the city is colorful and surreal. Catholicism, voodoo, and hoodoo—all things possessed of mystery—have co-existed in New Orleans for a very long time. Since I consider setting to be another character in a story, I let New Orleans influence the other characters’ perceptions.

2. At least twice in the book, characters explain the difference between voodoo and hoodoo. Why is it so important to the story that these two terms are so clearly differentiated? From your research, how have people viewed these two terms, and were there misconceptions you wanted to dispel?I use certain aspects of voodoo and hoodoo to symbolize good and evil. In this story voodoo is associated with placing curses, while hoodoo is associated with root work. I illustrate this by contrasting Calypso, a woman obsessed with the poisonous power of plants, with her daughter, Trinidad, who focused on their healing power.

Research shows that voodoo concerns itself with religious practices of the West African religion known as Dahomeyan Vodun. The African Kingdom of Dahomey was a location deeply involved with the slave trade. Bearing that in mind, it’s understandable that a people taken by force and enslaved would cling to their religious beliefs, desperately seeking some kind of solace or hope. When this West African culture encountered Catholic and French influences in Louisiana, it adopted and put a unique spin on facets of them, and Louisiana Voodoo was born with its gris-gris amulets (reminiscent perhaps of a Catholic scapular) and dolls (statues and relics). The major difference is Voodoo’s fascination with and Catholicism’s disdain for the occult.

Hoodoo is also called conjure, which refers to a culture’s folk magic. It involves calling upon some supernatural force to pull off a trick. Hoodoo, or conjure, seeks to bring about change. Root work falls under the hoodoo umbrella and is exactly what its name suggests—working with roots. A belief in the magical powers of plants to bring healing or harm is a driving force in THE SILENCE OF BONAVENTURE ARROW.

As far as misconceptions, I’m sure that every culture’s practices are distorted to some degree when brought into another culture; something is lost in translation, so to speak. Also, different cultures often assign different meanings to the same object/creature, etc. For instance, some cultures, like the Hopi of North America, saw the snake as a symbol of fertility and renewal. Snakes were set loose in the fields to ensure a good crop. In other cultures, snakes are symbols of the umbilical cord, an attachment to mother and nourishment. Still other cultures see snakes as evil and deadly, or as the physical incarnation of the devil.

3. I’m intrigued by the way Catholicism and hoodoo spirituality work together in this story. I would imagine them to be in conflict, as in the scene where Letice tells Trinidad that she wants Bonaventure raised Catholic and therefore free of voodoo/hoodoo influence. Yet Trinidad at least sees no contradiction in being a hoodoo practitioner and a believer in the Virgin Mary, and in fact, you integrate a lot of Catholic imagery in scenes of hoodoo healing. Why did you decide to integrate the two, instead of choosing one or the other? As well, what points of commonality did you find between Catholicism and hoodoo spirituality?

I integrated Catholicism and hoodoo spirituality in the character of Trinidad Prefontaine in order to reveal that goodness is not confined to one set of beliefs. Having been completely unloved by her biological mother, Trinidad turned to the Virgin Mary. There is a great misconception that Catholics worship Mary; they don’t. She is thought of as a mother and turned to for comfort and help. Trinidad is drawn to Mary in just such a way, while at the same time holding onto her belief in the supernatural healing powers found in Nature. I express commonalities between Catholicism and hoodoo spirituality in this passage:

She laid the note and the prisms on her homemade altar amidst those symbols and souvenirs of her deity’s Spirit—the Blessed Mother who loved every single child; the sea glass, like pieces of broken lives made lustrous and baptized by the ocean’s healing waters; the feathers of a bird that can fly precious little yet proclaims the new hope of every day’s dawn, and those odd little bits of nature’s bounty. From her pocket she pulled a holy card, one given to her in the orphanage by Sister Sulpice. The card was soft as a piece of old leather, made so by the oils in the skin of Trinidad’s hands. The front bore a picture of Francis of Assisi and printed on the back were the words to his Canticle of Brother Sun and Sister Moon.

Trinidad lives gently. Like Letice, she is a woman of strong convictions. She simply casts her net wider in order to bring close “those things she found spiritual.”

4. Why did you decide to heighten Bonaventure’s sense of hearing? What is it about the interplay between sound and Bonaventure’s silence that fascinated you?

Bonaventure’s gift of supernatural hearing connects him with the intangible. For instance, if he hears expressions of anguish or courage or joy, he also hears their cause. The idea of supernatural hearing fascinated me because by its very nature, hearing invites imagination to put a look, taste, smell, or feel to the sound. With his gift of wondrous hearing, Bonaventure uses sound to give form and substance to the originator of that sound.

5. Your novel deals a bit with Bonaventure’s struggle to fit in at school. The extent of his abilities is obviously fictional, but did you do any research into the kind of experiences children similar to Bonaventure (e.g. unable to speak, able to hear colours) undergo in school?

Rather than research, in this case I chose to draw from human nature. Life can be tough for anyone who is different, but childhood takes it to a whole new level.

6. If you had Bonaventure’s abilities, what would you do with them?

I certainly hope that I would use them as he does, to bring comfort.

Check out the rest of the Silence of Bonaventure Arrow blog tour! Complete list on the Savvy Reader website.

Win a copy of The Silence of Bonaventure Arrow – click here!

Thank you, Rita Leganski! It was a pleasure to read your book, and to learn more about the story from you!

Thank you again to Harper Collins Canada for an advance reading copy of this book in exchange for an honest review, as well as for the opportunity to participate in this blog tour.

4 thoughts on “Blog Tour: Author Q & A | Rita Leganski, author of The Silence of Bonaventure Arrow”