There were two kinds of people when a light turned red. One kind accelerated, the other kind braked. [p. 63 of the ARC] 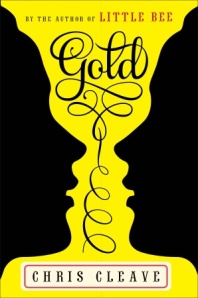 Chris Cleave’s Gold is about Zoe and Kate, the best and second best cyclists in the world, as they prepare for the final Olympics of their careers. Best friends and training partners, both are summed up neatly by the above quotation: Kate, a natural athlete with a husband and child, lives cautiously, while Zoe, a daredevil with a major chip on her shoulder and a bit of a death wish, blazes through red lights without bothering to check both sides of the road. Gold is a fast-paced, exciting sports novel. The cycling scenes are almost poetic, lyrical, and even though I have never been a cycling fan, I was completely caught up in the adrenaline rush. Take this excerpt for example:

Being chased down by another human being is a very intimate thing. She’d never been caught before. She heard each gasp of Jack’s lungs…

And then Jack said something to her. He didn’t have to shout, because he was so close now. He said, “Sorry, Zoe.”

He was sorry. She knew it was the only kind of apology that meant something. With both of them at 200 heartbeats per minute, with the peace of exhaustion coming over her, she understood the effort it took him to say that. She realized what it must have cost him. [pp. 108-109 of the ARC]

I am not an athlete, but wow, Mr. Cleave. The intimacy, the adrenaline, the human connection all in that passage — amazing. Gold is full of passages like that, capturing the spirit of a moment, the complexity of emotions I imagine top athletes must experience, the rush that I imagine compels them to keep competing, to keep training. Gold romanticizes sport — the novel infuses the physical struggles of training with the warm glow of competition. We want these women to win because we are caught up in the intensity of their love for the sport.

More than a sports novel, however, Gold is also a story about friendship. How can their friendship survive when they are forced to compete with each other for their final chance, ever, to participate in the Olympics? We also learn that the story of their friendship is even more complex than just a sports rivalry. From the first chapter, we see Kate’s insecurity over her marriage to Jack, and her concern that the more aggressive, vibrant Zoe might win him over. We also see that Kate and Jack’s daughter Sophie is seriously ill, and while Cleave veers into the maudlin at times when talking about Sophie’s condition, the child’s utter geekiness (she deals with her poor health by imagining her life in terms of Star Wars) keeps her absolutely endearing.

Zoe’s drive to win is extreme and selfish, but it also verges on desperate. Zoe’s competitive drive is deeply rooted in a childhood tragedy, and Cleave highlights her vulnerability. In a particularly poignant observation, Zoe says,

Happy people believed in someone. That was the difference between her and Kate, right there. Expecting company, people like Kate walked with a careful space beside them. Even in their worst moments they could imagine the possibility of someone. [p. 111 of the ARC]

In a way, I felt like I was supposed to root for Zoe. Even her coach (who trains both Zoe and Kate) has to admit he wants Zoe to win. While Kate wants to win, Zoe needs to win, and the coach admits he worries how Zoe will go on living if she ever loses. However, I found myself on Team Kate the entire time. Zoe annoyed me with her utter self-centredness, and even though Cleave does a good job keeping her angst understandable, I thought she went too far too often. Zoe may have the championship mentality, but her single mindedness compels her to do anything — manipulate, injure, wound — in the name of winning, and this disregard for the off-track lives of her rivals makes me less sympathetic to her situation. Perhaps it’s also because I could relate more with the softer spoken Kate, who may lack that single minded focus that makes athletes into champions, yet who also cares deeply about what is important to her — winning gold, yes, but also her husband and child.

At one point, when Zoe’s selfishness threatens the stability of Kate’s family’s comfortable lifestyle, I found myself actively hating Zoe. On one hand, I understood that Zoe’s actions, especially in that case, were spurred by deep, deep pain rather than just malice, but the extent of the damage she could cause was too much, and I hated her at that point. That, I think, is a testament to how deeply Gold gets into you: the characters are no longer just fictional constructs on a page; they feel like real people, and their actions feel like they have real consequences.

To Cleave’s credit, he keeps his characters complex. Even selfish, single-minded Zoe has her moments of kindness, even sweet, maternal Kate has her edge. Kate’s husband Jack is given texture by his love for Scotland. I especially love this scene where he sings The Proclaimers song “500 Miles” with Sophie:

It was a shout of defiance, was what the song was. It was the reason he and Kate and Sophie all knew she would get better. In his heart Jack was sure they could all win against this leukaemia just being sufficiently Scottish. [p. 113 of the ARC]

Isn’t that beautiful? Beautiful and heartbreakingly, tragically, futile. There’s the competition of cycling down a track, and there’s the daily struggle of facing your daughter’s leukaemia. In his author’s note, Chris Cleave writes, “Caring for sick children is the Olympics of parenting.” Indeed it is, and in a way, the stakes feel so much higher. This is me, speaking as a non-athlete and a non-mother. I can’t imagine pushing my body to its limits day in and day out for that elusive gold medal, but I don’t even want to imagine waking up day in and day out knowing my daughter is in pain and that she can die at any time.

I can imagine Jack, belting out songs at the top of his lungs in the desperate belief that this can keep Sophie alive. I can imagine Kate, pumping her legs beyond all endurance, because Sophie is cheering her on. I can see Sophie, in one of the most heartbreaking scenes of the book, cleaning vomit off her Star Wars Millennium Falcon ship, before her parents find out how sick she’d been that evening. I can even imagine Zoe, desperately needing to win gold, yet realizing the price she may have to pay to achieve it.

The romance of sport infuses Cleave’s Gold, but it is tempered by the harshness of life outside the track. Gold is a beautiful, gripping story, and, with the 2012 Olympics coming soon, a timely one. Gold takes us from the rush of competition to the reality of everyday life. Sometimes the twists seemed soap opera-like, but we are so invested in the characters that the narrative still works. Fantastic book, beautifully written.

Thank you to Random House Canada for an ARC of this book in exchange for an honest review.