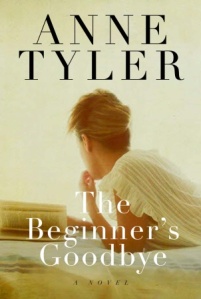 There is no such thing as the Beginner’s Guide to Grief. No such thing as Grief for Dummies. Sure, there are the five stages of grief, but really, they don’t help. Nothing can prepare you for the loss of a loved one, and while dealing with the loss might get easier over time, it will never become easy. Anne Tyler’s The Beginner’s Goodbye is a moving, beautifully written portrait of grief, a story of loss and the desire to put off the goodbye as long as possible.

When Aaron Woolcott loses his wife Dorothy in a freak accident, he finds peace only when she reappears. It’s not a ghostly encounter, nor has he forgotten that she’s died. It’s just, one moment she isn’t there, and the next moment, she is, and her presence gives him peace. Be honest: if someone you’ve loved and lost shows up again, can you imagine telling them to go away?

I originally thought The Beginner’s Goodbye was going to be about Dorothy showing up again, and about Aaron wondering if she’s real or not, but I’m glad that wasn’t the case. Rather, much like her reappearance in Aaron’s life, Dorothy remains mostly a presence in this story — she exists, but the story is really Aaron’s and those around him.

Tyler’s simple, straightforward narrative style keeps her story from ever becoming maudlin. Rather, it feels honest. So often while reading, I would nod and think, yes, I can relate. For example, Aaron hires a contractor to fix his house, but keeps making excuses about why he doesn’t have to be there to oversee the work. That house, after all, is a reminder of how Dorothy had died, and it’s only natural to want to stay away, even past the point of common sense — Aaron, now living with his sister, has to ask the contractor to bring over some of the clothes he’d left behind. A short dialogue, but very, very telling, and an example of how effectively Tyler uses the smallest details to show so much.

I also love this passage:

I realized that I had survived [the loss]… Even though I still felt a constant ache, I seemed unknowingly to have traveled a little distance  away from that first unbearable pain…

And yet, just two nights later, I had one of those dreamlike thoughts that drift past as you’re falling asleep. Why! I thought. Dorothy hasn’t phoned me lately!

…But then I came fully awake and I thought, Oh. She’s dead. And it wasn’t any easier than it had been at the very beginning.

Ever had that happen to you? It sucks.

Coming to terms with Dorothy’s death also means coming to terms with her life, and with their life together. Right after her death is Aaron’s realization that all the idiosyncrasies that had bothered him actually aren’t a big deal after all, and it takes time before he can step back enough to get a more realistic, balanced view of their life together. We meet Dorothy through Aaron’s memories, and through his perception of her after death, and it is through meeting both versions of Dorothy that we learn about Aaron. To be honest, I don’t think I ended up actually liking either character (Dorothy’s really cold, and Aaron, for all his desire for independence, is really needy), but I did believe in them. Tyler makes them feel real.

I wasn’t too happy with the turn the plot took towards the end, but by the time I finished the book, the ending did feel right. I also love the subplots involving the other characters — as anyone who grieves is forced to learn, other people’s lives go on, even while yours feels at a standstill. Seeing other people fall in love is both touching and bittersweet, as we view it through Aaron’s eyes.