Dear Harper Collins Canada: I love you! Thank you for bringing all these awesome crime, mystery and thriller writers to Toronto and for hosting fan events with them! First Peter James, and now Stuart MacBride. Do I dare hope for a Val McDermid, Martin Walker or James Rollins event on the horizon?

First, kudos to Harper Collins for such a killer event title (sorry, couldn’t resist). As a life-long mystery fan, how could I pass up the opportunity to plot a murder with a best selling crime author?

The evening began with a woman asking about Stuart’s writing process. Stuart turned the question back to the audience and asked how we read: in the bathroom, in bed, naked? Turns out he does sometimes, when the day is warm, write his books in the buff. Things you learn at these author encounters.

Stuart talking to us about murder

Stuart is just absolutely hilarious. He’s such a big, cheerful man, and the event felt more like a casual chat over drinks than an Author Event. At least until he mentions a fascinating fact that makes you wonder, how on earth could he know something like that? He’s probably best described by an audience member’s question: “You’re such a jovial man. Then I just read the first few pages of your book (Birthdays for the Dead, on-sale January 2012. Harper Collins kindly gave us all ARCs), and it’s horrific. How do reconcile the two Stuarts?” She sounded absolutely bewildered, and I can understand why. The first chapter of Birthdays is, in Stuart’s own words, “dark, nasty, and pretty damn twisted,” and hard to imagine coming from the man who repeated the question as “I’m such a handsome, sexy man. How do I write such dark stuff?”

"I didn't expect half this many people!" Stuart said when he entered the room.

We plotted a fictional murder with Stuart, which led to an interesting discussion on murder techniques. Someone in the audience came up with drowning as our murder method, and Stuart, the friendly, jolly man you can imagine having a beer with, said that a very effective way to drown someone is water boarding. He then drew a diagram and explained how the technique worked. “Trained CIA agents last 12 seconds under this.” An audience member points out that the method is ineffective because under those conditions, one would say anything. Stuart agreed and said that torture scenes in books and movies usually get it wrong. He then explained the most effective way to use torture to get information from someone. Then he gave an absolutely charming sheepish smile and said, “This is getting quite dark, isn’t it?” 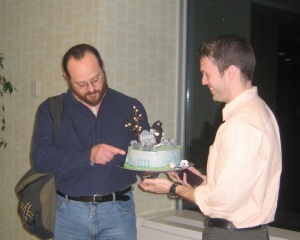 So, given all this knowledge, how does Stuart MacBride get the information he needs for his books? “A couple of gin and tonics, and pathologists blab all the gory details.” He then goes on to explain why burying a victim in concrete is ineffective unless done properly. It was actually very scientific and, dare I say it, fascinating. This is actually a perfect Halloween event; an evening with Stuart MacBride is worth dozens of ghost stories in a dark room. Delicious horror.

Stuart also gave a reading. He chose a short story he wrote entitled “The Princess and the Pervert,” a re-telling of “The Princess and the Frog.” It was dark and twisted; I was squirming in my seat, and almost gasped out loud at the ending. You can read the story here and it’s a fantastic, well-written, creepy-as-hell piece. But you definitely missed out, not hearing Stuart read it live. He’s a fantastic performer; his reading brought his characters to life. Some parts were hilarious, other parts just really, really freaked me out. Then he told a few of us later on about a short, rhyming story he wrote for his nephew Logan (after whom Stuart’s series character Logan McRae was named). It was about a skeleton whose mother gave him a fuzzy pink sweater. Sweet, funny story, completely different from “Princess and Pervert,” and I at least can imagine a Tim Burton short based on it.

One of my favourite parts of the night was the contest to win the entire Logan McRae series by Stuart. To win, we had to write down the most creative way to kill someone. You get a few dozen mystery fans in one room, and you’ll get a range of quite gruesome ideas. Murder weapons ranged from a poisonous snake to fibreglass to Silly Putty. Best part is that after Stuart read each suggestion, he explained why it wouldn’t work and sometimes, how an idea could be made more effective. Again, I wondered how he knows so much about the subject.

Anyway, I won! 😀 Stuart was having a tough time deciding between my entry and the fibreglass one, and fortunately, Harper Collins said they’d give out two prize packs instead of one. Even better, Stuart laughed at my entry: Justin Bieber music videos played in a continuous loop until the victim kills himself. When he was signing my copy of Birthdays, he shuddered, looked at me and said, “That’s unnecessarily cruel.” From Stuart MacBride, that’s high praise. He then scribbled “Bieber!” and signed with a flourish.

That’s another thing about Stuart MacBride that I love: he personalizes the books he signs, or at least writes something different in each one. One of the women had a sketch of a dead teddy bear, and another had a drawing of a skull with a princess crown. Another woman had a copy signed for a friend who couldn’t make it because of work. Stuart wrote “Sorry excuse for missing this!” then said, “We had cake!”

Speaking of cake, Harper Collins served this fantastic treat. It was delicious, but more importantly, I love the Death figure! Isn’t it cute? Stuart noticed the Death figure has glasses and a beard and called the designer cheeky.

Stuart’s just such a friendly, wonderful person, and I’m so glad to have met him. He even agreed to sign the entire Logan McRae library I’d won. So, added to my “Bieber!” I also have a skull and crossbones and a bloody eyeball. Love it.

If you’re free and in Toronto tonight (Wednesday, October 26, 2011) or tomorrow, definitely check Stuart out for yourself at the International Festival of Authors. He’ll be reading from the latest Logan McRae, Shatter the Bones, tonight with Denise Mina, David Adams Richards and one of my favourite crime writers, Ian Rankin, and hosted by Andrew Pyper (event details). Tomorrow, he’ll be performing with a literary all-star cast at Fleck, A Verse Comedy, also at IFOA. He told me it’ll be a lot more formal than the Harper Collins event, and he won’t be discussing water boarding at all, nor will he be reading from “Princess and Pervert.” But it should still be a great event. He’s an amazing reader, and such a friendly man. If you’re already a fan, heads up on these events and if you aren’t, I do hope you check him out.

[Final image courtesy of the International Festival of Authors website. All other images courtesy of Harper Collins Canada]