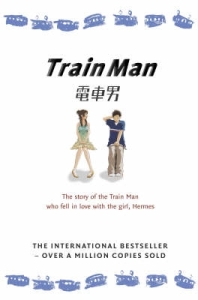 Japan, 2004. A hopeless geek saves a young woman from a drunk on a train, and posts about it on the 2-Channel chat forum. “I’ve never been thanked by a woman before,” the twenty-two year old techie admits, “so… I got so nerrrrrrvoussss.” The next day, the woman sends him a pair of Hermes teacups to say thanks. The geek gets giddy: “Damn. I’m getting all feverish. Gotta take a chill pill.” The other geeks on the forum urge “Train Man” to call “Lady Miss Hermes” and ask her out. So begins a wonderfully sweet, endearing romance recorded on the Internet and compiled by chat forum participant Nakano Hitori in the book Train Man.

I love Big Bang Theory, but I think the geeks in this book may actually out-geek Sheldon and Leonard. These are real geeks, in a real story, and I think that just makes this story so much more touching. Train Man’s previous encounters with women are, quite literally, just from anime and manga, and he elicits dating advice from the forum. What makes this extra endearing is that, since the others in the forum are also equally clueless with women, they search on the Internet for highly rated restaurants and acceptable date fashion. The romance moves much more slowly than in Western culture, possibly partly because of Japanese culture and partly because of Train Man’s shyness, and this makes each tiny step (Hermes sent him an email!) even more significant. After the second or third date, for example, Train Man agonizes about whether it’s time to make his Big Move: admitting to Hermes that he thinks she’s cute. I loved cheering Train Man on, as he developed from being too scared to call Hermes to casually telling the chat forum he’s seeing her again in a few hours.

Perhaps even more touching, however, are the other participants in the forum, who are almost mostly hopeless geeks. As Train Man’s story develops, others share their own (mostly disastrous) attempts at talking to women. One geek was once turned down by a girl who said she wouldn’t want to see his face while she ate. When a female participant said Train Man’s story makes her think of her happy twenty-year marriage, and makes her want to be reincarnated as a geek, another participant immediately replied that he wouldn’t recommend it. They live vicariously through Train Man’s romance, rushing home right after work to see if there are any updates. They analyze each of Hermes’ actions. It reminded me of high school, when my friends and I would dissect each sentence one of our crushes had said, but in Train Man’s case, it’s people from at least all over Japan discussing each minute detail with him.

Each of Train Man’s successes elicits cheers, squeals, and at times, even tears, as some forum participants confess to crying without knowing why. After one particularly significant piece of news, the participants responded with a series of giant images (animals or humans made up of dashes and slashes in cheering poses).   Among pages of those images and various congratulatory messages, one line stood out: “Shit, forgot to get my ASCI ready.” (From the context, I assume ASCI is what they call those images? Anyway, that line made me laugh.)

Reading the forum transcript, it’s impossible not to get caught up in the emotions, and I found myself cheering Train Man all the way. He is such a sweet, shy guy, and I wanted him to succeed with Hermes. The story has apparently been adapted in many different ways in Japan (movie, TV series, manga), but I’m not sure how many are available in an English translation like the book I read. Overall, it’s a cute, touching romance, which as forum participants noted, gives hope that geeks can become gods. One participant in particular posted that, inspired by Train Man, he gave a woman directions one day. Unfortunately, he chickened out when she asked for his name. Another participant responds: “You could’ve been Guide Man!”

[I bought my copy at Fully Booked in the Philippines, but this book is also available at Chapters Indigo in Canada, if you’re interested in checking it out.]