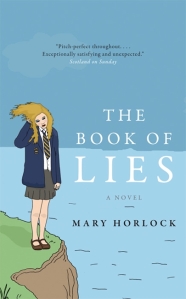 What a powerful book! The very first page tells us three things: 1. Catherine Rozier doesn’t want to be called Cathy. 2. She’s fat, but not fat enough to bounce after a 3,000 foot drop off a cliff. 3. She killed her best friend Nicolette on that very cliff. Mary Horlock’s The Book of Lies is a brilliant book about truth, peer pressure, and, above all, the culture of complicity and white washing that both allows and necessitates secrets and lies.

Fifteen-year-old Cat lives on Guernsey, a self-proclaimed “SMALL PARADISE,” where people convince themselves that nothing bad can ever happen and even the Nazi occupation is considered to have been “character building.” From Cat’s sardonic, witty narration, we learn about her friendship with the beautiful, popular Nic, and how that friendship soon deteriorated into bullying and eventually into Cat killing Nic. Nic’s death is ruled a suicide, despite Cat’s fear of/desire for being caught, and like other less than perfect aspects of Guernsey, its grittier aspects are glossed over. “I wanted a proper punishment,” Cat confesses after the lesser crime of being caught drinking, “Or at least a proper parent.” Unfortunately, as Cat observes, “the adults on this island are utterly useless. They think Guernsey’s so peaceful and perfect that their kids can come to no harm. Don’t they consider the harm kids can do to each other?”

Equally compelling is the story of Cat’s uncle, Charlie Rozier, who was also fifteen during the Nazi occupation of Guernsey twenty years earlier. Ashamed that his father’s printing press was used for Nazi propaganda, he befriends the older, cooler Ray and plots with him to escape the island and take important information to the Allied forces. Charlie’s rebellion is more for acceptance than any ideological fervour, but he is caught by the Nazis and his father also implicated. Feeling responsible for his father’s getting killed by Nazis and blaming Ray for betraying him, Charlie leaves Cat’s father Emile audio recordings with his confession and tasks Emile with making the truth come out.

The Book of Lies just piles on the layers of lies and confessions, and just when I thought I knew the truth, I find out I’m wrong. The book is a mystery in that sense, but more important than finding out the truth is the question, are you sure you want to know the truth? Emile’s dogged search for the truth leads him to drink. He confesses, “I thought the truth would mean an end to any doubts and uncertainties, but the lies are all that’s certain now.” Every revelation of truth is uncomfortable, but even worse is the realization that that truth isn’t all of it. Cat professes to want to tell the whole truth and nothing but in her confession, which is this novel, but even her motives are suspect.

The novel appears to answer a lot of the questions it raises (Why did Cat kill Nic? Why did Ray turn Charlie over to the Nazis?) but it inspires so many more questions instead — Why do we trust? Why do we confess? Is it worth fighting for the truth when everyone around you is so much more comfortable with lies? The Book of Lies has wonderfully complex characters, each with a unique voice and set of motivations. Horlock makes you feel like you are an inhabitant of Guernsey as well, with a personal stake in the stories these characters tell and the stories that form the all-important image of the island. Horlock makes you care, so you hurt along with Cat and Charlie and Emile. The truth is painful; keeping it hidden under a whitewash of lies is even more so. Amazing, thought-provoking, witty and heart-tugging book. Read it.