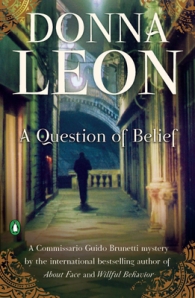 Rarely do I highlight an e-book as often as I do Donna Leon’s. A quick glance shows a total of twenty-six highlights, two of which I shared on Twitter. Not bad for a book of only two hundred and eighty-eight pages in the print copy. And every one of those passages is something I’d love to read aloud and sigh over with other Donna Leon fans. Like the eighteen previous Commissario Guido Brunetti novels, A Question of Belief is more than just a mystery – it’s a foodie travelogue of Venice, a series of references to classic literature, a commentary on Italian politics, and, above all, another few hours with the charming, honourable, family man Guido Brunetti.

There’s a heat wave in Venice, and Brunetti’s team barely has enough energy to solve a murder, look into courthouse corruption, and investigate a con man ripping off old ladies. A lot of what I love about the Brunetti novels are the scenes Brunetti spends having lunch with his family – it’s nice seeing a detective who is also a dedicated husband and father, and his wife Paolo makes the most mouth watering meals. For classic Nancy Drew fans who may remember Hannah Gruen’s meals, imagine those with a contemporary Italian twist. Unfortunately, Brunetti’s family goes on vacation to escape the heat, so we don’t see them as much here as we do in other novels. Bright side, Leon gives us such gems as Paola and Brunetti’s phone conversations, and this wonderful description of Paola: “Brunetti had managed to marry a woman who looked forward to going to bed at ten o’ clock with Henry James. Or, when driven by wild passions she was ashamed to reveal to her husband, with Henry James and his brother.”

Paola appears a bit more jaded here than in past books, and Leon really gives us a sense of how tiresome it is for Paola and Guido to live in a city with such corruption, and for Guido in particular to have to deal with so many lies from witnesses: “He realized, as he said it, that his soul was tired of backstairs gossip, tired of listening from the eaves and consorting with informers. Ask them directly and have done with it.”

Of course, the main draw of any Brunetti novel is Brunetti himself, a detective with whom a reader can fall in love. His co-worker Signorina Elettra says, “A man without a sense of fashion is a man without a soul,” and Brunetti is, quite definitely, a man with a soul. At one point, he notes that a character’s husband must have decorated their house, because “no one who wore that blouse could have chosen those curtains.” He also clearly appreciates his co-workers, calling Signorina Elettra simply “Much, much, too, very” after explaining it is an expression of happiness he culled from his daughter’s friend.

The mysteries are compelling as well, especially because you care for the characters. You care for example that the con man is caught so he’ll stop defrauding the aunt of Brunetti’s partner Vianello. Brunetti’s strength as a detective is his ability to read people, similar to Hercule Poirot’s focus on human psychology rather than CSI-type evidence. When speaking to a witness, Brunetti realizes that with other people, at hearing a certain tone, he would have placed “a comforting hand on the arm of the speaker,” yet is reluctant to do so with this particular person. His analysis of his own reluctance reveals something important about that speaker that he then uses in his investigation.

Long story short, I love Question of Belief. Leon’s next book, Drawing Conclusions, is already on my e-reader, and I’m definitely excited to read it.

1 thought on “A Question of Belief, Donna Leon #50BookPledge”