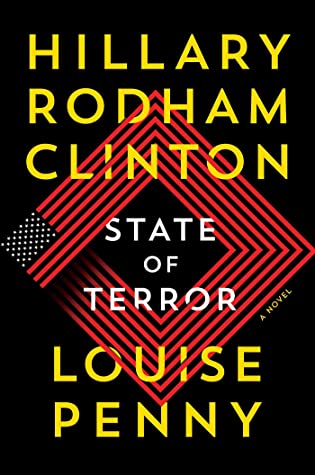 State of Terror is such a taut, gripping thriller, and heartfelt ode to friendship and love. The heart that makes Louise Penny’s Gamache mysteries so good is here in Ellen’s relationships with her children and her BFF Betsy, and in the General’s random references to John Donne poems.

And I love the behind the scenes peek at the life of a secretary of state! I had no idea the US secretary of state could have a counselor who wasn’t really a politician but was her BFF whose counsel she legit trusted. I love seeing how Ellen’s mind worked, and how she parsed through all the dealings and double dealings to get at the information she needed. I love her friendship and also her working relationship with Betsy, and how Betsy legit helped her with work stuff. I thought their word-nerdy code was really cute. Both authors say in the afterword that Betsy is based on a real person — Hillary’s own BFF — and that explains so much about the overflowing affection for the Betsy character on the page. It’s a lovely tribute. And while Hillary writes in the afterword that Ellen and her daughter Katherine are also based on a real life politician/friend and her daughter, it’s hard not to see the love and utmost respect between the characters reflecting that between Hillary and her IRL daughter Chelsea.

I also really love how President Williams and Ellen’s respect for each other develops over time. They start out as nemesis. (I forgot the order of events but basically, Ellen was a vocal critic of him from her media empire; and Williams refused to use political clout to help Ellen with a family emergency.) But while Williams sometimes makes the wrong choices, he’s ultimately depicted as an intelligent man, and a good president.

Overall, this was a major page turner and so much fun to read. And Gamache fans will delight at a couple of shoutouts to Three Pines. (A lovely, subtle one is a dog named Pine after the town.)

Also, the budding romance between Gil and Anahita was a bit too insubstantial to really hook me, and the flashback descriptions of their sex life were much more awkward/cringe-worthy than hot. But one thing I really love about this subplot was a moment when Anahita remembers something her mom told her: it’s not about the first question, but the second, or even the third. (Basically, find yourself a guy who cares enough to dig deeper, and find out how you feel about stuff.) I thought that was good advice, and I love the way it was worded.

1 thought on “Review | State of Terror, by Hillary Rodham Clinton and Louise Penny”