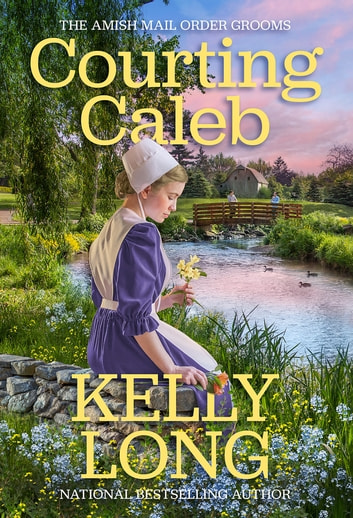 When potter Abigail Mast advertises for a mail order groom, she doesn’t expect two eligible bachelors to show up at her door. The bishop comes up with an unusual solution: Abigail must court them both, and decide whom she wants to marry by Valentine’s Day!

From the novel‘s narration — and its title! — it’s pretty clear from the start who, between Caleb the handyman and Phillip the farmer, will win Abigail’s hand. To the author’s credit, she doesn’t belabour the love triangle aspect too much. Abigail and Caleb hit it off almost immediately, and their kisses send heat and sparks through both of them. In contrast, Abigail and Phillip have many pleasant conversations about seeds, and at multiple points, Abigail has to remind herself to give Phillip a fair shot at her hand.

To the author’s credit, she gives Phillip a well-developed romance of his own. While Abigail and Caleb are wonderful characters as well, there were times I found myself more drawn to Phillip’s romantic subplot. Partly, it’s because while Abigail and Caleb hit it off immediately, Phillip and his love interest have a more contentious start to their relationship. They also have a legit barrier standing in their way — the fact that Phillip is technically in town to marry Abigail, and neither he nor his love interest wants to hurt Abigail’s feelings. And finally, the secondary heroine’s backstory is more complicated, with present-day implications that make her understandably reluctant to pursue a romantic relationship. In contrast, Abigail’s tragic backstory, about her guilt over the death of a childhood bully, doesn’t seem as big a barrier.

Both romances develop at a pretty good pace. I do wish Abigail had announced her decision earlier, only because she had a clear preference so early on, and her delay in announcing this caused unnecessary pain to the secondary couple. But I’m glad the author didn’t delay Abigail’s decision to the very end.

There’s also a rather sweet subplot about an elderly man named Birchbark who seems to have magical powers. He sets Caleb up to do some tasks that are intended to teach him valuable life lessons, and he has a pack that seems to yield more abundance than what is put in. This was a cute plot thread, and well-suited for the holiday theme of some of the scenes, but it didn’t really add too much to the story for me. The romances were magical enough without the existence of actual magic.

But the subplot that I thought actually was unnecessary, and added a nasty sheen on an otherwise feel-good story, was the one about the man who abused his wife and was also having an affair. This plot thread is somewhat linked to Abigail’s story — the man makes a physical threat towards her and her two suitors, and his mistress played a role in her tragic backstory. I also see how this subplot added tension to the otherwise almost perfectly smooth sailing of Abigail and Caleb’s romance. But overall, it just felt tacked on for drama. I may have understood if the abusive husband was being set up as the Big Bad of the entire series, but that doesn’t seem the case. I only hope his wife gets a romance of her own later in the series.

The author also has an annoying habit of ending chapters with ellipses. She often uses it as a fade-to-black mechanism when the scene starts heading in a steamier direction. And it’s totally unnecessary. I admit this is a minor quibble, and it’s nitpicky to even bring it up. But it just makes the dialogue or the narration feel artificial, and that pulls me out of the scene.

Overall, though, it’s a good romance. I love the unusual angle of having the woman court the man. I find the bishop hilarious, and I love both main couples and the broader cast of characters.

Thank you to Kensington Books for an e-galley of this book in exchange for an honest review.