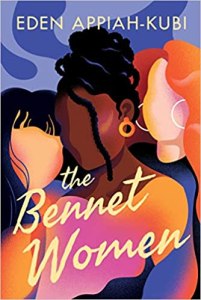 The Bennet Women is a true contemporary adaptation of Pride and Prejudice, in which Eden Appiah-Kubi maintains key story highlights from the original, while updating her characters’ concerns and conflicts for contemporary times. This adaptation manages to straddle the line between inserting as many of the original’s story beats as possible (Darcy’s infamous “Elizabeth Bennet can’t tempt me” at a party; Darcy’s younger sister’s history with Wickham, Darcy’s letter explaining all, Elizabeth’s confrontation with Lady Catherine de Bourgh, etc), while still updating the context of these story beats so that it fits more naturally within contemporary times.

In doing so, Appiah-Kubi crafts a narrative that actually feels contemporary — we can imagine her versions of Elizabeth, Darcy, Jane, and so on existing in a present-day university, and dealing with relationship problems in that way. Unfortunately, by removing much of the social constraints that so hemmed Austen’s characters in when it came to relationships, Appiah-Kubi also ends up significantly lowering the stakes, perhaps proving just how much so many of the original’s story beats were products of their time.

The lived identities of various characters updates the social conventions that hems them in. For example, as a Black woman in STEM, EJ constantly has to work twice as hard to prove she is neither a ‘diversity hire’ nor an ‘angry Black woman’. Jamie’s shyness is partly influenced by having had little experience in dating as an openly trans woman, and much of her relationship with Lee is about navigating socially-imposed insecurities. Will’s rudeness is rightly called out by his loved ones as a personality flaw; he makes up for it by being incredibly talented at noticing things, and eventually softens in his approach. I love these updates, because they make Austen’s story feel fresh while still paying homage to what had made the original characters so beloved in the first place.

The updates also make sense, because while marriage was front-of-mind for women in Austen’s time, contemporary women have other concerns. This is particularly evident in Appiah-Kubi’s update to Wickham — rather than a rake who preys on innocent women for sex, Jordan is an actor who preys on vulnerable young women to help him sell drugs in exchange for a range of potential motivations, which does include sex, but also includes a potential boost to their acting careers.

However, one key difference that I understand but feel it lowered the stakes somewhat is that Appiah-Kubi made her men more emotionally aware and her women more open about communicating their feelings. While much of Elizabeth and Darcy’s conflict was because social conventions restricted their ability to actually talk things out in the open, EJ and Will communicate very well. EJ is also much savvier than Elizabeth was in sussing out untrustworthy people, and was able to see through Wickham/Jordan’s lies quicker than Austen’s heroine was. Which all make for a good and healthy relationship from a contemporary standpoint, but the relatively rapid resolution also means much of the main conflict in the romance loses steam midway through. The novel tries to address this by changing the romantic conflict into the possibility of EJ moving away after college, and neither EJ nor Will wanting a long-distance relationship, but because both characters are so willing to engage in honest conversation, there seems little doubt that they’ll work out a viable solution.

I do like that Appiah-Kubi gives Jamie and Lee a conflict of their own. There’s even a nice shoutout during a pivotal conversation about how well-versed both of them are in therapy-speak, which again means that they actually listen to each other, and recognize when emotions are clouding their own judgments. Again, this is a good example of a healthy relationship, but it also means that their conflict barely festers before being resolved within a chapter or two, and then never addressed again.

Even the iconic confrontation between Elizabeth and Lady Catherine barely fizzles in this update, where Lady Catherine is reimagined as Will’s ex-girlfriend. Whereas the original scene was majorly cathartic, because after so many chapters of Elizabeth biting her tongue, she finally lets loose and stands up for herself, EJ has been standing up for herself in her personal life throughout most of the novel. So when Will’s ex appears, we already know she barely poses a thread, and when EJ stands up to her, it’s just more of the same. A more impactful confrontation involves a panel of academics in EJ’s professional life, where EJ has been far more careful about speaking up, and so standing up for herself shows more of her character’s growth. Unfortunately, that scene takes place off-page, and therefore also barely sizzles.

The denouement also dragged on too long. There were at least three or four moments when I thought the story had wrapped up nicely, only to find there was still another chapter. Part of it is that the novel juggles two main plot threads — EJ and Jamie’s senior year at Longbourne U, and EJ and Will’s romance. So much of the novel was structured around senior year and a prestigious post-grad fellowship EJ is applying to, that when those threads are resolved, the remaining chapters feel almost like afterthoughts. The final chapters deal with closing off the final loose threads in EJ and Will’s romance, but there’s little of the will-they/won’t-they tension in the second half of the novel, and the final chapters feel especially anti-climactic.

Finally, and this is probably more on the marketing than the novel itself, the blurb promises to be about three women, with the third being EJ and Jamie’s friend Tessa, a Filipina astronomy student with guy problems. Tessa does appear in quite a few scenes, but her story is barely a subplot. Partly, I think it feels this way because the novel adheres so closely to the characters and story beats of the original that it was especially noticeable how Tessa doesn’t have a clear, one-to-one inspiration from Austen. Given her guy problems, I thought she was being set up as the Lydia who’ll fall prey to Wickham/Jordan, but given that she was barely around for the latter half, perhaps she was more like Mrs Bennet, and simply a catalyst for EJ and Jamie to get their love stories?