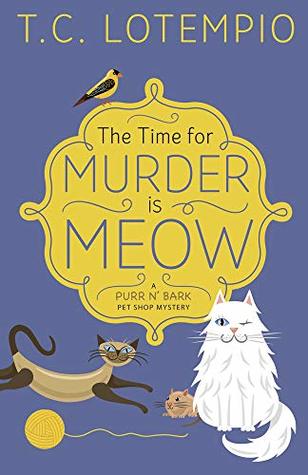 The Time for Murder is Meow has so many things I love in a cozy mystery: compelling lead and sidekicks, adorable kitties, bits of Hollywood behind-the-scenes, and red herrings that truly create a tangle. In this mystery, series lead Shell McMillan wants the local museum to do an exhibit of her late aunt’s movie poster collection, but her proposal is blocked by a board member who reportedly had a long-standing feud with Shell’s aunt. When the board member is murdered, Shell becomes the prime suspect, and must figure out the real killer to clear her name.

I was super confident for most of the book that I knew the villain, even while Shell pursued other suspects, but when my main suspect was unexpectedly cleared at the 82% mark, I realized this mystery was even twistier than I realized. I did figure it out within the next few pages, and am super proud of still solving the case before Shell did, but overall, I give major kudos to T.C. LoTiempo for a truly twisty and challenging whodunnit.

The characters, both series mains and suspects, are fantastic. Lead character Shell is a former actress who left the biz to move to Fox Hollow, Connecticut and take over her late aunt’s pet store, the Purr N Bark. It turns out she’s never enjoyed the glitz and glamour of Hollywood life anyway — she’d always wanted to be a veterinarian, and only fell into acting due to pressure from her actress mother. I love her backstory, and while she does make some questionable choices (pro tip: don’t yell at someone that you’ll make them while within earshot of a homicide detective), she’s a good detective, and it’s fun watching her wrap her head around the various clues.

Equally awesome is her former co-star Gary, who initially flies out to convince Shell to do their show’s cable reboot (unfortunately, despite Gary’s gorgeous head of hair, it’s Shell whom the producers consider the star attraction), but then quickly gets caught up in her investigation. I love his and Shell’s friendship, where their banter conveys mutual respect and affection. And Gary is hilarious — I love the running gag about how he keeps wanting to try new restaurants (because he’s always hungry and Shell’s a terrible cook), but just before they can actually eat, they get a new lead in the investigation, and poor Gary’s stomach has to wait. I don’t know if I’d last long as Shell’s investigative partner — unlike Gary, I’d probably tell her to go ahead while I have my lunch! — but these scenes made me laugh every time.

To the surprise of perhaps no one who knows me, the highlight of this book for me are Shell’s two cats, Kahlua (a Siamese her snobbish mom gave her before Shell could adopt from a shelter) and Purrday (her aunt’s one-eyed Persian ‘roommate’). I absolutely love how rich and vivid these cats’ characterizations are, and how distinct they are from each other. They’re larger-than-life, and their personalities are given as much depth as the human characters, and as a cat lover, I just fell all the more in love with this book because of that.

While I generally love cats in cozy mysteries, this series has won a special place on my shelves because of how much I can actually see my own cats in these characters… and yes, how much I also see myself in Shell’s cat lady-ness. The relationship between these two cats is hilarious, from Kahlua’s initial jealousy and territorialism over Shell’s bed, to their eventual teaming up when it comes to the all-important mission of demanding that Shell give them food and treats. Goofy and affectionate Purrday, with mischief that leads Shell and Gary to uncover important clues, is the more obvious feline hero, but any cat lover will also melt for the haughty and elegant Kahlua, who likely sees herself as far too smart to engage in such antics herself. These cats are a delight, and I can’t wait to see more of them! I also love how so many of the town’s residents seem to have their own pets, and I bet future instalments will give us more of a glimpse of these animals as well.

Overall, this is a fantastic beginning to a cozy mystery series. I’m hooked, and I can’t wait to read more!

Thank you to Midnight Ink for an e-galley of this book in exchange for an honest review.

1 thought on “Review | The Time for Murder is Meow, by T.C. LoTiempo”