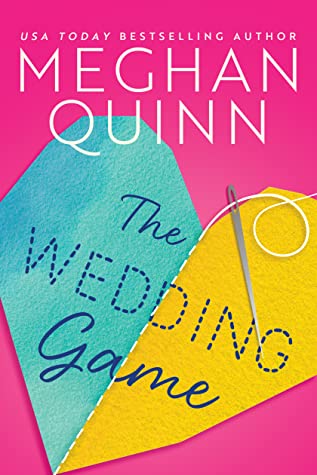 Enemies to lovers, and grumpy / sunshine are two of my favourite romance tropes, and the fiery meet-cute in The Wedding Game is pretty stellar. Not only are Luna Rossi and Alec Baxter competing on a TV show to win their respective brothers a dream wedding and NYC penthouse, but the first time they meet, Alec mistakes Luna for a PA, and orders her to get him a coffee. Luna spits into his cup in retaliation, and tells him as much, so she can watch in satisfaction as he tosses the cup without drinking.

I absolutely, wholeheartedly, love Alec. He’s arrogant, ambitious, and the grumpiest person on set, but he’s also dealing with the trauma of having had to grow up too young. He practically raised his younger brother Thad by himself, and did his best to shield Thad from their parents’ toxic arguments. Due to his parents’ marriage, he doesn’t believe in love or marriage, and has devoted his career to helping women get good divorce settlements. His motivation for agreeing to do the competition with Thad and Thad’s fiancee Naomi is to support his brother, and perhaps repair the estrangement between them that began when Alec began focusing on his career. Alec, Thad, and Naomi are all complex characters whose dilemmas can sometimes break your heart, and I absolutely adore their family unit.

I also liked Luna from the start, but she took me a while to really warm up to. Part of it, I think, is that compared to Alec, her childhood and family life seemed perfect. She does have some growth to do in the novel — she signs up her brother Cohen and his fiance Declan for the competition against their wishes, which Cohen rightly calls her out on — but beyond that, she doesn’t seem to struggle much until late in the novel, and even then, her fiercely protective best friend Farrah is ready to wage war against those who hurt her, while Luna mopes in her bedroom.

Luna also does things that the author hypes up for comedic effect, but that turn out being too cutesy to be cute. One major example is when she barks (yes, literally barks like a dog) at Alec in response to something he says, simply because she doesn’t want to speak to him. That was the most cringe-y example, but even milder moments sometimes felt a bit forced. Like when she was literally hyperventilating into a paper bag because she was stressed about confessing to Cohen that she went behind his back on the show, and she knew he would lecture her. I can understand the stress, but also, I wanted to tell her to chill; she’s an adult and isn’t about to be grounded or sent to her room without supper.

The story picks up significantly when Luna and Alec finally become friends. Their banter is cute, and their chemistry hot. They work well together, and I love how they know how to support each other as friends as well as lovers. The scene where Luna holds Alec through a bad time was really sweet.

I also love how their relationship’s development happened alongside the development of their respective relationships with their family members. Thad and Cohen are wonderful brothers, even if Thad is a bit over-the-top dramatic, and as the future in-laws, Naomi and Declan provide perfect balance to the family units. The biggest conflict had as much to do with Alec and Luna’s relationships with their families as it did with their relationship to each other, and I love how the author took us beyond the romance in showing the most important people in the main characters’ lives.

Overall, The Wedding Game is a fun novel, and the reality show scenes are entertaining. But the heart of the novel is in the families, and I love how Luna and Alec falling in love together also helped them reinforce the love they have with their families.