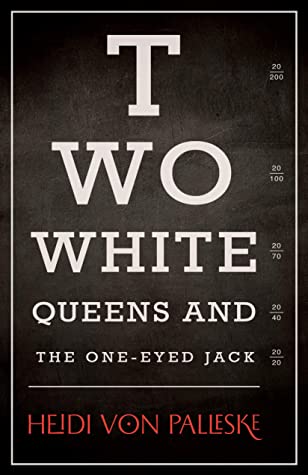 Two White Queens and the One-Eyed Jack is an evocative, beautifully written novel that invites the reader to fall under its spell. It follows the lives of two pairs of children — best friends Gareth and Jack, and twins Clara and Blanca — and their families. It begins with Jack’s fall from a tree at age six, an accident that fills Gareth with guilt, causes Jack to lose an eye, and lets Gareth’s mom know that her other son Tristan has actually been blind in one eye since birth. A visit to Jack’s mother Hilda’s workplace introduces the boys to Clara and Blanca, who are albino, and whose mom lives in a psychiatric facility. The boys are taken by Clara and Blanca’s unusual looks, and so the story expands into their growth into adulthood, and the ways in which the children’s lives intersect with various people in their lives. The story takes us from Ontario to Berlin, where Hilda grew up, and through the lens of visual art, photography, film, and music, delves deep into metaphors around ways of seeing, and the differences between sight and vision.

The author writes beautifully. I don’t think I’ve appreciated eyes as much as I did while reading about Siegfried’s craft as an ocularist, and I love how part of Jack’s character growth is shown through a decision to get a David Bowie-esque glass eye that doesn’t match his biological one. I also like how Tristan develops a love for film because the camera lens is also monocular, and how he finds inspiration in filmmakers with partial blindness. Gareth is a bit of an emo blowhard, but his character also feels realistic and complex.

The characters’ and the narration’s fascination with the Clara and Blanca’s albinism rubbed me the wrong way at times. Gareth and Jack often described them as fairies, and as beautiful in an otherworldly way, and both of them become obsessed with capturing the twins’ beauty through their art. I admit this is realistic, and I can imagine boys, especially younger boys and teenagers, thinking this way, but coupled with the author’s beautifully poetic narration, the way characters spoke of the twins’ beauty felt fetishistic at times, and just gave me an icky feeling as I read. Part of that, I think, stems from the girls being portrayed as a unit through much of their childhood (“the twins” rather than individual personalities), which added to this sense of them as objects of someone else’s gaze rather than subjects in their own right.

That being said, I love how the author transitioned the narrative’s treatment of Clara and Blanca as their character arcs progressed. The scene where the twins debuted their singing to the public in a competition made me cheer because of how awesome they were. Having grown up either fetishized or insulted for their albinism, they decide to play up their looks to establish their brand — appearing on-stage in all white with only red lipstick for colour, they declare their musical duo’s name as Bleach. It’s a “hell yeah!” kind of moment, and part of that may stem from my own frustration as a reader with how much other characters tend to objectify them. I also love how the twins’ characters progressed from there, with Clara and Blanca each revealing more of their differences from each other. The author does a good job in showing how other characters’ assumptions about each twin’s personality end up being proven wrong.

As much as I love how the twins grew into themselves as they neared adulthood, I found that the book’s final chapters seemed to drag. The sense of magic and wonder from the earlier chapters seemed to have dissipated — I’m not sure if that was an artistic decision to show the characters’ shift in perspective, or not, but while the parts of the book captivated me, I found myself skimming the last few chapters.

Overall, it’s a good book, and beautifully written. Von Palleske weaves together so many disparate themes, motifs, and metaphors, that it’s impressive how tightly woven the final novel turns out to be. TW: rape (from a family member), suicide, abuse.

Thank you to Dundurn Press for an advance reading copy of this book in exchange for an honest review.